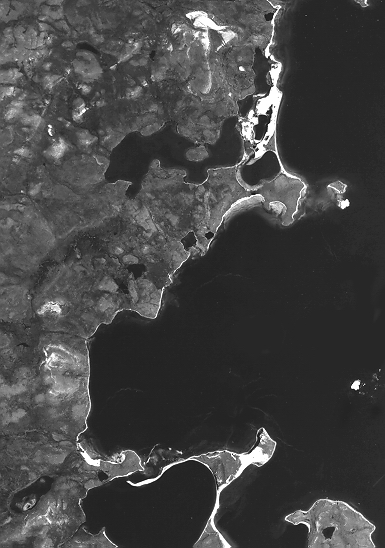 entrance with small water-crossing leading south to a wide campsite just below the north slope of a giant esker knob with culturally stratified levels.

In the northeast part of the Beverly caribou range, KdLw-01 was used by hunting families in mid-July when the caribou were migrating southwest along the Dubawnt River from its calving ground near the confluence of the Dubauwnt and Thelon Rivers at Aberdeen Lake. It was used by Chipewyan, Late & Middle Taltheilei, and Pre-Dorset hunters. 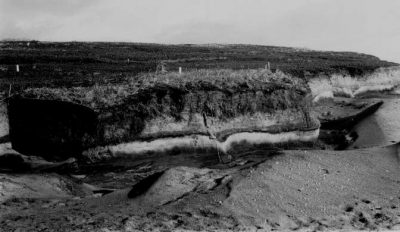 KeNi-04, located at 62.774 N Lat. and 106.958 W Long., is an immense sand blowout with culturally stratified sidewalls preserved from wind ablation by trees and their roots. It is at an elevation of 365.76-381 m AMSL on the shore of northwest Whitefish Lake in the north-central Beverly caribou range. It is the largest Beverly site (ca. 10 acres), with six sections: A (wide flat area for tenting, butchering and hide preparing in the middle of sand blowout on the shore); B (closeby but inland); C (water-crossing overlook 100 m southwest of A & B and narrowing caribou access to the crossing. Forested and heavily dissected, area C was a manufacturing site for various tools, with little room for tents, butchering or skin working; D & E (tiny 2 m high “island” hummocks preserved from wind deflation by roots and too small to say much. KeNi-4 was used by hunting families in early August when caribou migrated southwest 1-2 weeks earlier from the KjNb-6 & 7 sites 150 km northeast. It is a major caribou water-crossing exactly at treeline, with scattered trees dotting the site and continuous forest beginning on the south side of the crossing.

KeNi-05, located at 62.781 N Lat. and 106.969 W Long., only a km from KwNi04 but not at the water-crossing, is at an elevation of 358.14 m AMSL. This tiny residential site was occupied by hunting families in early August when the caribou were migrating west along the shore, rather than taking the KeNi-04 water-crossing. In the northwest bay of Whitefish lake, scattered trees dot the site in lower elevations along the shore, dwindling to open tundra a hundred meters north.

The KjNb sites at the junction of the Clarke, Hanbury and Thelon Rivers in the central Thelon Game Sanctuary were used for several weeks in July when the herd peaked (cows, calves, bulls). After coalescing several months earlier near its calving ground 150 km downstream, it ascended the Thelon Valley and crossed the river from the north side to the south shore sites. 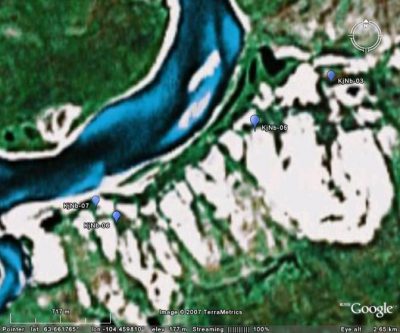 KjNb-03, at 63.667 N Lat. and 104.441 W Long. and an elevation of 182.88 m AMSL, is along a narrow ridge dropping to the river. Needing several subdatums due to its length, it overlooks a small lake and was large enough for tenting, hide-preparation and tool making.

KjNb-06, at 63.658 N Lat. and 104.472 W Long. and an elevation of 152.4 m AMSL, was the first site excavated (1970), its 2 m deep stratified levels forming the radicarbon and cultural baseline for all later excavations. Protected from westerly winds and unseen from its water-crossing, this large sand blowout was ideal for tenting, cooking, tool-making and other activities. Most of the site was destroyed by wind, its center being a common surface for tools of all traditions. Tools in preserved blowout walls permitted cultural assignment of many of the central tools.

KjNb-07, at 63.659 N Lat. and 104.475 W Long. and an elevation of 152.4 m AMSL, is the smallest most concentrated Beverly site, its central part only 6 x 6 meters. On a tiny promontory overlooking its water-crossing, it was highly visible and used by hunters tracking incoming herd movements from many km downriver. Not a residential or hide-working site, it was used for tool-making.

KkLn-04, at 63.726 N Lat. and 100.436 W Long. and an elevation of 185-187 m AMSL, is in the far northwest Beverly caribou range at the outlet of Grant Lake on the Dubawnt River. It was occupied by hunting families in early July after some post-calving herds migrated south along the Dubawnt River. The oldest site in the Northwest Territories, it was used after deglaciation on a migration route east of the Thelon route.

KkNb-03, at 63.736 N Lat. and 104.406 W Long., is at an elevation of 160 m AMSL where the Thelon River narrows after flowing southwest past Grassy Island. On a broad ridge above the south side of the narrows, it was large enough to serve many purposes. 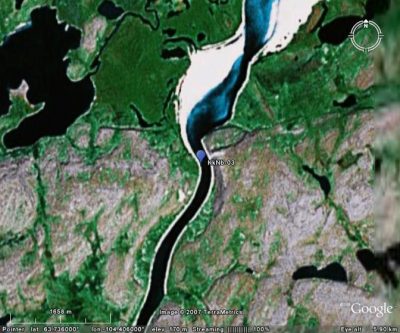