Around a Sacred Fire: Indigenous Youth and Medicine People Connect for Change 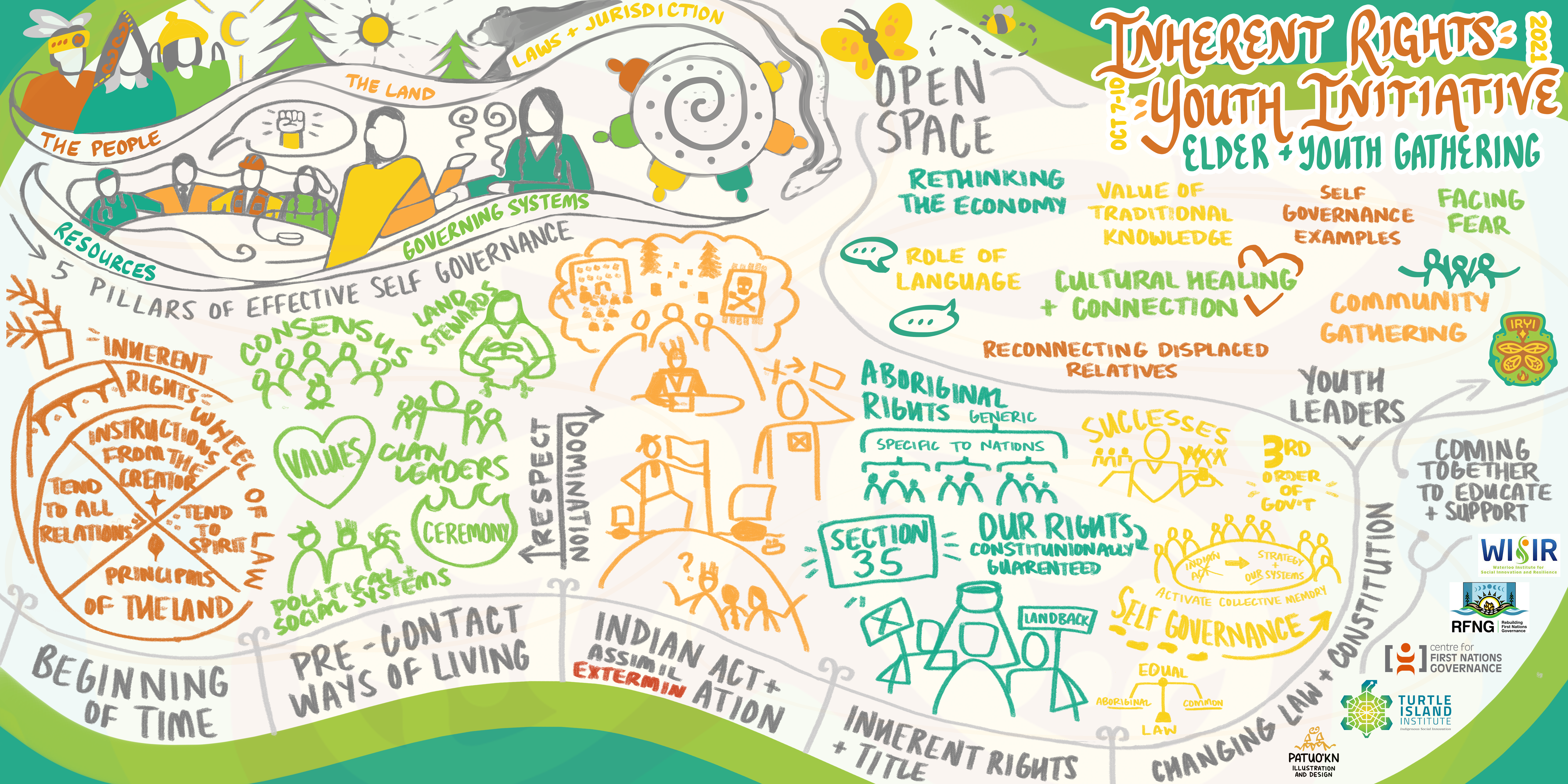 “You are skiy’ze — young future leaders who are coming up,” said Satsan (Herb George), one of the Wet’suwet’en Hereditary Chiefs of the Frog Clan, at the inaugural gathering of the Inherent Rights Youth Initiative (IRYI) in October 2021.

The gathering, Lands, Languages and Ceremonies, offered a virtual ceremonial space for Indigenous youth to learn about their histories, shared culture, the inherent right to self-government and to connect with elders and other youth from many nations.

IRYI was created in July 2021 with elders, medicine people and youth from RFNG partner communities to support learning, rebuilding identity and leadership skills. The initiative is a partnership project between CFNG, RFNG, Turtle Island Institute, the Waterloo Institute for Social Innovation and Resilience, and the Institute of Public Administration of Canada.

By and for the Youth

Youth were involved with the initial planning stages to shape the entire framework of the Initiative. Design retreats and training sessions taught them how to facilitate online conversations and use technology to foster a sense of community. They also received teachings on pre-contact life, the impact of the Indian Act and inherent rights case law in Canada.

Bringing youth and elders together was an important element in the vision for the Gathering. Lil’wat Nation Elder Martina Pierre (Saw̓t) and Ojibway-Anishinabe Elder Makwa ogimaa (Jerry Fontaine) provided guidance to maintain the ceremonial space, pass on teachings, and support the youth. 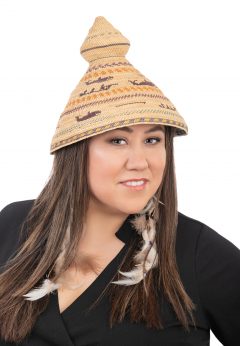 “We wanted to set the DNA of the project, to get the important pieces in place right from the start,” says pawatsqʷačiił (Pawa) Haiyupis, from Ahousaht First Nation, a research assistant in the Aboriginal Title Lands Cluster of the RFNG project and graduate student in Indigenous nationhood at the University of Victoria.

“The IRYI youth invited other elders, leaders and young change-makers in their communities to the Gathering,” she says. “The youth were supported and mentored through the process. They were able to highlight their accomplishments to their communities and become more confident in their leadership abilities and understanding of inherent rights.”

The Gathering builds on the vision of the Canadian Indian Youth Workshops and Ecumenical Conferences of the 1970s. Satsan and many elders also attended these workshops and conferences as young people, which had a strong impact on them as leaders.

“I went to the workshops searching for myself, just like a lot of our young people are today,” says Satsan. “We all suffer from the same systemic effect of the Indian Act and colonization. I got to meet a lot of young people from other nations across Turtle Island who were struggling for the same thing — our identity as a people in terms of our history, our sacred homelands, languages and ceremonies.”

Connecting Youth with Mentors and Elders

The initiative aims to ensure that youth have teachings to empower them now and to pass on to future generations. They are supported in their challenges by those who have gone before them.

“The youth need to know about the legacies of colonialism and the intergenerational effects of being ‘wards of the state,’” says Elder Pierre. “Once they understand why this was put in place and recognize their inherent rights, they begin to have a voice for change.”

“I’m happy to be involved in the Initiative,” she says. “Youth from across Canada have shared a lot. They are ready to take responsibility.”

“I’ve made a strong connection with the group from my community in Mount Currie. We had a ceremony with tobacco from the Gathering offered at a sacred pipe ceremony. The youth go up into the mountains and take part in sweat lodge to help find their identity and form a comradeship.”

Youth learn from elders, but also from each other. They described learning about the differences between their nations in culture, traditions, territories and treaties, but also the similarities.

“Unity is important,” says Elder Pierre. “If we have the mind to strategize together about what we can each do in our own communities, then we know we have the sacred circle across Canada.”

“The youth will be the ones to continue carrying the torch for the inherent rights movement. That’s what I envision. There’s no one else who can do it but ourselves.” 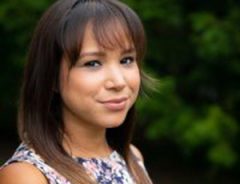 “It was important for me to participate in the Initiative,” says Amsey Maracle, a member of the Mohawks of the Bay of Quinte living in Tyendinaga Mohawk Territory. “Youth need the opportunity to learn about inherent rights and leadership, and to learn from elders.”

Through her graduate course on policy research and evaluation with IPA Professor Jerald Sabin, Maracle was also able to take an evaluation role with IRYI.

“As an Indigenous student, this flexibility made me feel like I had a place in the program,” she says. “There was openness to different avenues to learning, so I could focus on Indigenous governance.”

Maracle was able to connect learning in the program and her administrative work in RFNG with practical evaluation work for the Initiative. Being involved with RFNG and IRYI has shaped the way she views public policy and the differences between Canadian and Indigenous governance.

“So much time and space is consumed dealing with the current situation we are in,” she says. “There is real power in education. Conversations put us on another path for the future. The youth are blown away — you see the change when the lightbulb goes off.”

“It is so empowering to be part of a movement that helps young people find their place in their communities.”

Through her work with IRYI, Haiyupis uses process design, group facilitation, training and capacity building, along with Open Space Technology, to create meaningful engagement in an online format.

“It is so important for our culture and identity to have a connection to the places we’re from,” she says. “Creating a space for sacred teachings online that would work with cultural teaching was a challenge. The elders learned to use breakout rooms and communicate in the chat. We sent gift bundles to participants ahead of time, which included medicine bundles, so they could take part in the sacred ceremonies.”

Satsan met Darrell Boissoneau, former Chief of Ketegaunseebee (Garden River First Nation) at the youth workshops in the 1970s. At the gathering, Boissoneau led the water and sacred fire teachings and kept the fire burning for the four days, using ashes from the 1970s workshops.

“Darrell used the online platform to make it as interactive as possible. It felt like we were together in person,” says Haiyupis. “We all felt that he was passing the torch to the next generation, bringing it full circle. The ashes from our gathering will be sent to all the participants.”

“The intergenerational connection is so huge,” says Haiyupis. “The Initiative has offered a virtual space for support and healing. We are a source of strength for each other, even if we can’t be together in person.”

“When I was a young person and heard about the Indian Act, I’d roll my eyes and didn’t want to listen,” says Terry Poucette, an adjunct professor in SPPA and a West Coast Aboriginal Title Lands co-leader in RFNG from Stoney Nation who presented at the gathering.

“But it rules every part of our lives — from birth to death. If we are going to try to make changes in our communities, we have to know what the problem is. We have to know the truth before we get to reconciliation.” 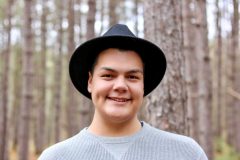 “I have gained so much knowledge through IRYI,” says Lyndin Belleau, a Ketegaunseebee youth from Garden River First Nation and bachelor of business administration student at Algoma University.

“I learned so many important things,” he says. “After listening to Satsan talk about the vision he had from his youth, learning about the Indian Act, the five pillars governance models and the legal history brought forth from other nations shaping today’s legal framework, I feel more empowered.”

“It was incredible to network with other young people who are also looking towards a brighter future in their communities. Hearing about what they are experiencing and knowing they are feeling what I’m feeling — there was a real commonality and connection.”

“I saw a passion in other young people from across Canada, united by a common goal and mission,” he says. “Talking to elders gives me a sense of purpose and lifts me back up. I have a renewed sense of hope and optimism for change in our communities.”

The IRYI partners are looking at ways to continue supporting the participants in their leadership development, and to host future events for more emerging leaders across Canada.