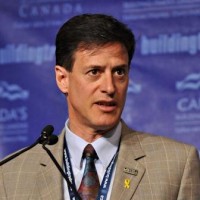 Brigadier-General (Retired) Gregory Matte is a former CF-18 fighter pilot and a Fighter Weapons Instructor “Top Gun” graduate with extensive operational mission experience. He has been assigned multiple command positions during his career, including as the Task Force Commander for all Canadian flying operations in the Balkans, as well as the Commander of 4 Wing Cold Lake in Alberta. One of his final assignments in the military was Chief of Staff for the co-ordination of the air, land and sea security for the 2010 Vancouver Winter Olympics.

He was awarded the Governor General’s Gold Medal upon graduation from Royal Roads Military College with a degree in Physics and Computer Science, and later completed a Master’s Degree in Defence Management and Administration from the Royal Military College of Canada. A running enthusiast, he won the Canadian Forces national championship in the marathon in 2003, and subsequently competed for Canada in the World Military Games in Palermo, Sicily that same year. Active in martial arts, he has a 2nd degree Black Belt in Taekwon Do.

Greg retired from the Canadian Forces in September 2010 after 29 years of service, and following an assignment as a Director-General in the public service and work in the private sector, was the initial National Executive Director of the Helmets to Hardhats Canada, a program that he led for over 6 years. He has relocated to Victoria, BC and has returned to his love of flying as the General Manager of the Victoria Flying Club.

Greg completed his PhD in 2020 following a decade of part-time studies at Carleton. His thesis examines how the relationships between apprenticeships, the labour market and the post-secondary education system are coordinated, governed, influenced and shaped in BC, as well as how these same relationships have evolved, including the impact of such changes on apprenticeship programs as a skills ecosystem. The period of 1993 to 2004 was specifically chosen as it was a period of bold political reforms pertaining to trades training within the province by two ideologically opposed political parties. The qualitative research design applies a case study methodology, comparing the differences between these two governments, as well as process tracing, within the theoretical framework of historical institutionalism.