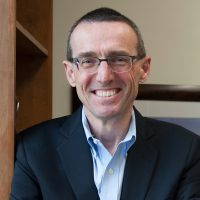 Alasdair Roberts is a professor of public policy at University of Massachusetts Amherst. In 2022-23, he is the Jocelyne Bourgon Visiting Scholar at the Canada School of Public Service. He is also co-chair of the ASPA Presidential Committee on International Scholarly Engagement.

Professor Roberts writes extensively on problems of governance, law and public policy. His most recent book, Superstates: Empires of the Twenty-First Century, was published by Polity Books in December 2022. His previous book, Strategies for Governing: Reinventing Public Administration for a Dangerous Century, was published by Cornell University Press in 2019, and received the best book award from the ASPA Section on Public Administration Research. Eight earlier books have received four book awards.

Professor Roberts is the first non-US citizen to be elected as a Fellow of the U.S. National Academy of Public Administration. In 2022, he received the ASPA Riggs Award for Lifetime Achievement in International and Comparative Public Administration. In 2014 he received Canada’s Grace-Pépin Access to Information Award for his research on the right to information. From 2009 to 2017, he was co-editor of the journal Governance.