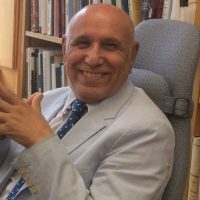 In his research, Professor Rajaee concentrates on identity and the human condition through an understanding of the political, in both Western and non-Western traditions. In his works Globalization on Trial (2000) and Kenneth W. Thompson, The Prophet of Norms; International Thought and Practice (2013), he has addressed these concerns as they manifest in the West and assessed the modern globalized condition of one civilization containing many cultures. In addition, Professor Rajaee conducts specialized research of various specific regions. Works such as Bazigary dar Baq-e Hoviyat-e Irani; Sarnemooni Hafez (Being a Player in the Garden of Iranian Identity; Hafez as a Paradigm, 2017), Moshkeleye Hoviyat-e Iranian Emruz (The Problemarique of the Contemporary Iranian Identity, 2018), Ma’rekeye Jahanbiniha (The Battle of Worldviews, 1995 and 1997) and Islamism and Modernism: the Metamorphosis of the Islamic Discourse in Iran (2007) address politics and identity among Iranian Muslims; Andisheye Siyassi Mo’asser dar Jahan Arab (Contemporary Political Thought in the Arab World, 2002) concentrates on the political thought of contemporary Arab Muslims; and his book Tahavol Andisheye Siyasi dar Sharqe Bastan (The Development of Political Ideas in the Ancient East, 1993 and 2011) considers political and international thought of ancient Mesopotamia, Persia, India, and China. Along with books, Professor Rajaee has published a number of articles in leading journals on the role of intellectuals in politics, cultural issues in globalization, and Iranian politics.

After being the Director of the College of the Humanities for ten years, and a professor in the Department of Political Science, he currently dedicates his time to teaching in both units. Along with co-teaching the fourth year core course of the Humanities Program, he teaches courses in political science and in his area of Muslim political thought, both past and present.

He follows his research agenda by concentrating on two research projects, both authored books. The first, tentatively titled “Performing Human; Civility and Civilization,” offers a philosophical journey into the art of performing human. The second (in Persian) tentatively titled “Civilizational Governmentality or Sustainable Development; Ideas and Thinkers” presents an account of the “idea of the political” as well the views of such luminaries, as Hannah Arendt, Fernand Braudel, Hamid Enayat, Ibn Khaldun, Darioush Shayegan, Chalres Taylor and others whom, in Rajaee’s account best help the understanding of the political.

Moshkeleye Hoviyat-e Iranian Emruz. (The Problematique of the Contemporary Iranian Identity). Tehran: Nashr-e Ney, New edition 1397/ 2018, (This is the eighth printing of the book)