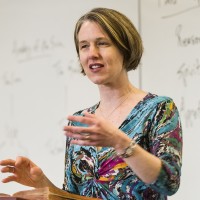 Micheline White is an Associate Professor in the College of the Humanities and the Department of English. She began teaching at Carleton as an Assistant Professor in 1998. She completed a B.A. (honours) in English Literature at the University of Toronto in 1989 and then moved to Aomori, Japan, where she taught English at a Japanese High-school for a year. She received an M.A. in English Literature from the University of Ottawa in 1992 and a Ph.D. in English Literature from Loyola University Chicago in May 1998. Her main field of study is English Renaissance literature, and she is particularly interested in women’s writing and Reformation history. She has published several recent articles on Katherine Parr.

Micheline White speaks to Mary Hynes on CBC’s Tapestry about her Research on “How Two Queens Revolutionized the Book of Common Prayer.”

Interview about Katherine Parr in French with Daniel Mathieu of Radio-Canada for “les voies de retour”:
(go to 15:50)

Honors and Awards Since 2011

“Katherine Parr, Translation, and the Dissemination of Erasmus’s Views on War and Peace,” Renaissance and Reformation / Renaissance et Reforme 43.2 (2020): 67­-91.

“Women in Worship: Continuity and Change in the Prayers of Elizabeth Tyrwhit and Frances Aburgavenny” in A History of Early Modern Women’s Writing, ed. Patricia Phillippy. Cambridge:  Cambridge University Press, 2018, 170-185.

“Pray for the Monarch: The surprising contributions of Katherine Parr and Queen Elizabeth I to the Book of Common Prayer.” Times Literary Supplement, 3 April, 2015: 14-15.

This piece sheds new light on the historical origins of the “Prayer for the Queen’s Majesty,” a prayer that appeared in the 1559 Anglican Book of Common Prayer and that is still used today. It demonstrates that the prayer is derived from a Latin prayer by Georg Witzel for the Holy Roman Emperor printed in 1541. It was adapted as a prayer for Henry VIII, translated by Katherine Parr, and disseminated in her 1544 Psalms or Prayers, a book of wartime prayers. Parr made fascinating modifications as she translated, enhancing Henry’s virtues and military prowess. Although 19th and early 20th-century historians noted the connection between the 1559 “Prayer for the Queen’s Majesty” and the earlier “Prayer for the King,” they were unsure of the origins of the prayer and did not openly attribute it to Parr or examine Parr’s literary skills. Parr is not mentioned at all in more recent accounts of the Book of Common Prayer. This piece also argues that the prayer was almost certainly inserted into public worship and edited in 1559 by Elizabeth I, Parr’s beloved step-daughter. The prayer appeared in Elizabeth’s Chapel Royal five months before the printing of the 1559 BCP and she had translated the prayer in her youth as a gift for her father. Elizabeth made the prayer more suited to her sex, toning down the passages about military glory and ferocity. This means that Elizabeth was likely an editor of a female-authored part of the BCP, a detail that complicates the general assumption that the prayers in the Tudor Books of Common Prayer were compiled, written, translated or edited by clergymen.

“The Dedication and Prayers from Anne Gawdy Jenkinson’s translation of Guillaume Du Vair’s Meditations upon the Lamentations of Jeremy.” English Literary Renaissance 37 (2007): 34-46.

“Power Couples and Women Writers in Elizabethan England: the Public Voices of Dorcas and Richard Martin and Anne and Hugh Dowriche,” in Framing the Family: Representation and Narrative in the Medieval and Early Modern Periods, eds. Diane Wolfthal and Rosalynn Voaden. Tempe: Medieval and Renaissance Texts and Studies, 2005, 119-38.

“A Woman with Saint Peter’s Keys?: Aemilia Lanyer’s Salve Deus Rex Judaeorum and the Priestly Gifts of Renaissance Women.” Criticism: A Quarterly for Literature and the Arts  45.3 (2003):  323-41.

Plenary talk. “The (In)Visible Queen: the Circulation of Unattributed Prayers by Katherine Parr.”  March 2017.  Galway, Ireland.  Conference on “Reception, Reputation, and Circulation in the Early Modern World, 1500-1800.”  You can listen to a podcast here on Sound Cloud.

Amy-Lee Parent: “The Rest is Drag”: A Look at Cross-Dressing and Gender-Play in As You Like It and Twelfth Night. [MA 2018].