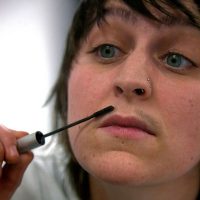 Raised in Sainte-Anne-de-Bellevue, Quebec, Cara Tierney is an interdisciplinary cultural producer whose work hovers around visual art, social activism and education. Their artistic practice foregrounds issues of language, gender, desire and materiality and uses the body as a point of departure to question the structures that mediate our identities. Cara holds a BA from Mount Allison University, moved to Ottawa in 2002, completed an MA in Canadian Art History at Carleton University in 2004, and began rigorously performing the deconstruction of their identity shortly thereafter.

Tierney has taught at the National Gallery of Canada, Algonquin College and currently teaches at the University of Ottawa where they received an MFA in 2012.   This past September saw the opening of Tierney’s first major curatorial project TRANSACTIONS, currently on view at the Carleton University Art Gallery until February 2017. They are presently pursuing a Phd. in Cultural Mediations with a special focus on Art, Activism, Education and Trans*(plus) culture and identities. As a proud queer, trans, non-binary individual THEY hope to couple their academic research with dynamic creative collaborations to produce spaces that bridge communities and fill the gap in knowledge concerning Trans* identities.