Home / Health / Being Diagnosed with Adult ADHD as a Professor

Being Diagnosed with Adult ADHD as a Professor

Story of being diagnosed 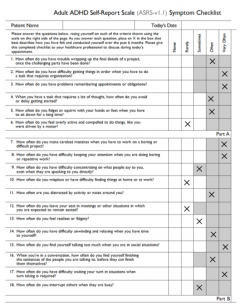 As my middle son entered grade 3, we began to see he was struggling in the classroom and at home. He had recently switched from the English-stream in school to a French-immersion stream. While this was difficult, he was having trouble adjusting that we couldn’t just attribute to the change in the classroom setting. These signs included not completing classroom tasks, having difficulty in writing, increasingly disorganized, and frequently being distracted in class. At home, he was more tired at the end of the day, more prone to outbursts, and was getting more frequent migraines. It took us some time to see ADHD as a possible diagnosis as he wasn’t hyperactive (on the outside) or disruptive in class. We now know that our conception of ADHD was lacking and based on information that was incomplete and/or wrong.

Our first step in seeking a diagnosis was to complete an online questionnaire for ADHD based on what we see in him, with the intention of sharing this with his pediatrician and getting a referral for a psychological assessment. However, when my partner and I filled in the form it was like a lightbulb turned on – I immediately saw these same symptoms in myself. After speaking with my doctor, I made appointments for psychological assessments for myself and for my son.

ADHD is a genetic, neurological disorder that is indicated by problems with attention, impulsivity, and/or hyperactivity. Many adults with ADHD have difficulties with inattention but exhibit few or no symptoms of hyperactivity (source). Adults with this set of symptoms related to inattention but not hyperactivity have the “predominantly-inattentive” ADHD subtype (source). This form of ADHD primarily affects executive functions of the brain, such as verbal and nonverbal working memory, self-regulation, motivation, and planning. These differences can present as difficulty in maintaining attention or focus, use of working memory and recall, regulating emotions, organizing, or prioritising tasks.

As a professor, these symptoms can be both a blessing and a challenge. While I’m easily distracted by shiny new projects, I can also be creative and like to join new teams. I can be forgetful of specifics (names especially), I focus on ideas and connect what we’ve said before to new things I’ve learned. Sometimes I can work on one idea to the expense of many other small tasks, but my hyper-focus can be a real benefit to getting last-minute grants submitted.

Assessment observations for children being screened for ADHD can be very subjective based on preconceived notions about certain behaviours. This throws some different perspectives …. pic.twitter.com/mWNAmsU1lg

What I’ve learned in the past months is that I have developed a series of tricks to compensate that have brought me to where I am. On the positive side, I have allowed for flexibility in my home and work life, where I can alternately be distracted or hyper-focused, sometimes going to coffee shops to write at 5 am for days in a row. On the negative side, the differences I have with executive functioning can result in difficulties with administrative tasks, both getting them done and having the details completed correctly. At home, this is compensated by an incredibly organized partner with a tremendously detailed memory. At work, this is compensated by having administration send multiple email reminders.

Where my story is going

The act of knowing that I have ADHD has helped immensely. While it has allowed me to develop new strategies for helping through some of the difficulties, more importantly, it has given me some leeway to be kind on myself. When I’m having trouble getting things completed, when I miss deadlines, when I forget things I was supposed to complete, I can have a bit of forgiveness and look at ways to help myself for next time.

Since my diagnosis, I have also begun to trial medication to treat ADHD symptoms. Thus far it has been incredibly successful. Combined with anxiety medication, I have been able to improve on my systems for focus and planning. At home, this has resulted in less daily stress and being generally more cheerful.

I plan on posting more about this in the future and have some strategies for how I use tools for ADHD as an academic. You can also follow me on Twitter where I post about ADHD, academics, research, and other things.