“Silence… mostly silence,” responded Musicologist and sound researcher, Professor James Deaville when asked how he might summarize the sound of the global Covid-19 health pandemic.

Unlike other crises such as war or natural disasters, the virus itself is quiet.  In news coverage, journalists are not reporting from chaotic war zones with weapons detonating in the distance, or seaside while the violent winds of an impending hurricane distort their microphones. Instead, the streets are mostly empty and mostly quiet.

“The virus makes no sound itself; it’s a silent killer,” says Professor Deaville. “And the physical distancing measures have created a quieter world.” 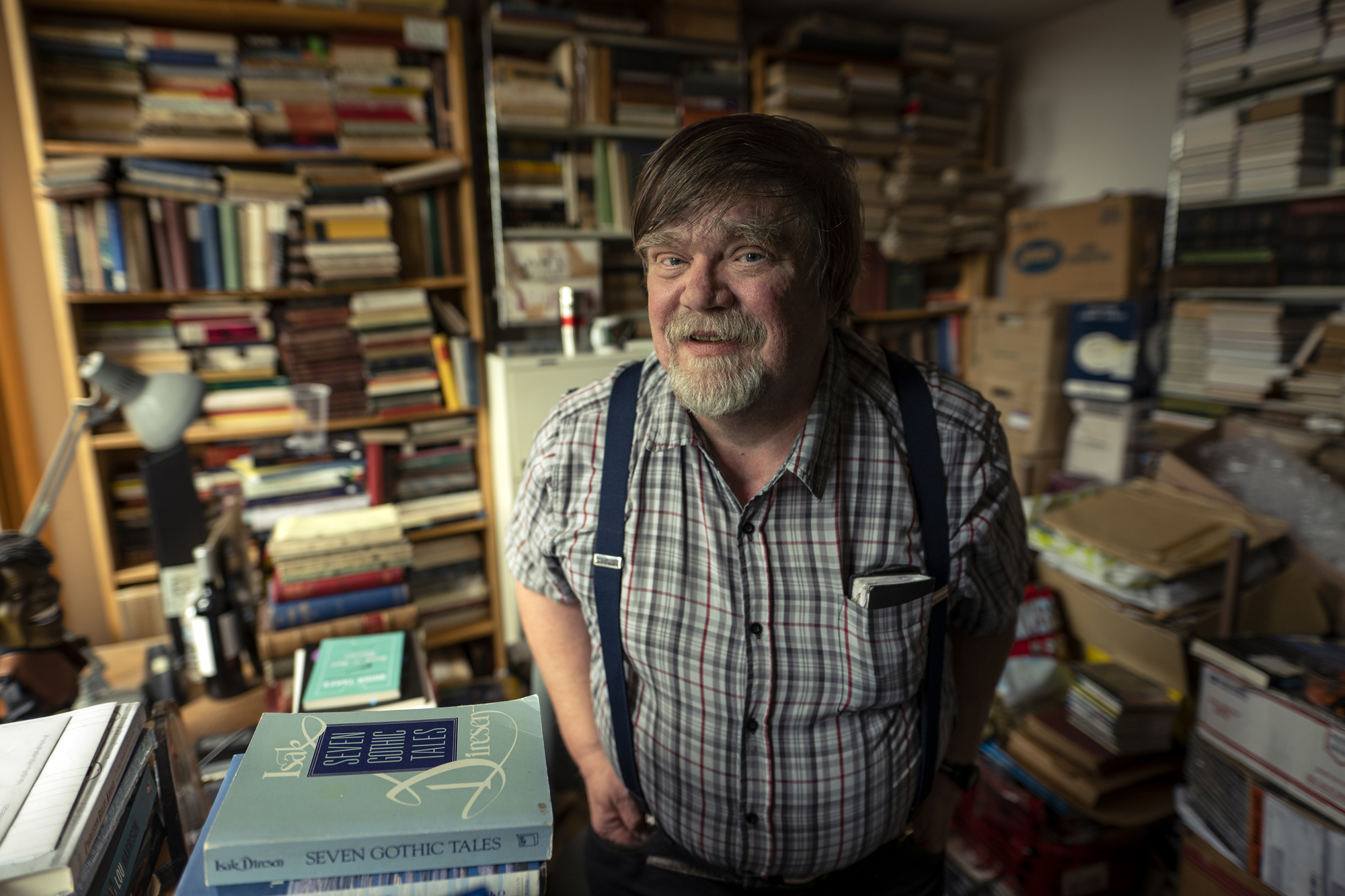 “The soundscape of Covid-19 is what we have assigned to it,” he says. “And so far, the consensus in the media has been to avoid the sounds of battle in favour of gentle, soothing music, including that of grief and mourning, and the calming music of what we might term “neoliberal benevolence.”

The sound of ‘neoliberal benevolence’ is Deaville’s reference to the contrived music employed by corporations to self-promote their goodwill towards the public during the pandemic. “And while they may even harbour genuine feelings of community spirit, the ultimate driving force is the need for success in the capitalist marketplace,” says Deaville.

Deaville muses that he might get in trouble for making this observation on corporate expediency, but his point illustrates the incredible impact the pandemic has had on all forms of media. The notes and tones of your favourite podcast, local news and late-night television have all dramatically shifted to sound more sombre, more introspective, and maybe less familiar.  Given that we find ourselves in an unprecedented, stand-still moment, there are no recognizable sonic call-backs to similar situations. For other traumatic events like 9/11 or the Humboldt Broncos tragedy, music has played a commemorative role in the aftermaths. But during this ongoing trauma, for example, the generic music that has historically led television newscast audiences into a commercial break has mostly been supplanted by solemn silence.

The Power of Music

Prof. Deaville, who has long researched the influence of music and sound on perceptions of media, particularly film and television, explains that in challenging times, it is essential that we pay close attention to media-constructed sounds as they have persuasive powers that are communicated to audiences both implicitly and explicitly.

“As musicologist Nicholas Cook pointed out in 2000, music is the ultimate hidden persuader,'” says Deaville. “It invades our minds in ways the visual cannot since it is not attached to any particular object.”

“For example, if someone asked you after attending a movie, what did you think about the music, you might ask, what music? And yet it was there at work, making the film’s narrative more believable.”

Deaville points to the coverage of the American invasion of Iraq in 2003 as an instance of the power of music in news contexts. At the time, media outlets commissioned ‘war themes’ from composers in anticipation of the outbreak of war.  These television executives wanted something that conveyed and exacerbated the mood of audiences.

“The Philadelphia Inquirer’s music critic Peter Dobrin summarized the desired effects: ‘Like quick-firing subliminal messengers, special music is telling TV viewers and radio listeners what to think and how to feel about the war on Iraq;” says Deaville.

“Richard O’Brien, Fox News’s Creative Director, wanted something ‘with a marching feeling… We wanted the music to say, ‘Something big is coming this way’.  Meanwhile, Director of CBS Evening News, Eric Shapiro asked for something that sounds like war drums and conveyed, in his words, ‘a climate of fear.’ Shapiro continued: ‘To me, this is a real live war, and we should be both awed and simultaneously scared…  It is just Techno Ali vs. Frasier IV – we’re going to knock the crap out of them, testosterone driven big-punch music.’”

Although a health pandemic without an enemy’s face; one which resulted in a nearly global lockdown, is more abstract and tougher to soundtrack, Deaville has noted some fundamental characteristics of the scoring of the virus.

For example, when Covid-19 first arrived as a recurrent news story, Deaville took stock of the discrepancies in the soundscapes presented by western media when covering various regions around the world. Discrepancies that corresponded and reinforced already formulated stereotypes of the people and cultures of that particular region, be it in Wuhan, Tehran or Milan.

“The orderliness of China was presented through the absolute silence of the lockdown in the country. Abandoned streets like you’d see in a post-apocalyptic film. The only sounds from the streets were those of police chiding people in loud voices for not obeying the quarantine,” says Deaville.

“Meanwhile, Tehran came off as a chaotic place, unable to muster the quarantine properly – thus the viral image of the Deputy Minister of Health mopping his brow. The streets are made to appear and sound noisy and disorderly, with people speaking in a language we do not understand, engaging in religious practices we do not understand.”

For Italy – a country celebrated as a land of music – western news coverage focused on Italians singing and playing instruments from their balconies. “It was like the fulfilment of the image many have of that land and its people. They cannot help but make music and sing opera from their windows, represented as cheerful even though they were in quarantine and their friends and family were dying,” says Deaville.

Regarding any variances between Canadian and American Covid-19 coverage, Prof. Deaville was reluctant to make general comments based on the fact that there exists media of all stripes and directions on both sides of the border. However, Deaville did detect a tendency in American news coverage toward adopting a harsher and brasher tone toward the pandemic, like this is some enemy that the United States was defeating.

“This is due to the polarized political context in America,” says Deaville. “Not that politicization does not occur here in Canada, but televised CTV and CBC have appropriated music and musical activity to serve as a ray of hope in the midst of the death and joblessness. Thus, they often end their primetime newscasts—in the human-interest final slot—with an example of a noted solo musician ‘gifting’ their music to the world or of an ensemble singing or playing together on Zoom as symbolizing our unity and resilience as a nation.”

As he observes, Canadian broadcast news media have a history of mobilizing music and sound to soften the effects of what they have reported, whether for example after the 9/11 attacks or the heart-breaking murders in Nova Scotia.

In comparison to such human disasters (and natural catastrophes), Deaville believes that media are likely frustrated as they try to make content that poignantly captures the sounds of the health pandemic. “How do you capture it in music and sound? Well, you can consider those ‘waging the battle’ and overlay some feel-good track over images of health-care providers. It is truly challenging.”

While there is yet to be any coherent formula for sound coverage, importantly, Deaville stresses that sound and music can be employed as an influential tool for individuals practising self-isolation in these challenging times. The compelling music videos shared with the world by Deaville’s colleague, Music Professor Jesse Stewart as he has recovered from brain surgery during this time of crisis is a superb illustration of the therapeutic power of creative music.

“Still, I think you will find people going to their personal, private music, sounds that one doesn’t often encounter on television or the Internet,” he says. “It might be gospel, or it might be Metallica, it is music that is meaningful for that person.”

“I would like to believe that artistic taste-shaming takes a holiday during a crisis like the one we are in, so whether Reba McEntire or André Rieu, it’s all good, whatever helps you to cope,” says Prof. Deaville.

Through the Garth Wilson Fellowship in Public History offered by Ingenium, the federal Crown corporation which oversees museums related to science and technology, and the Department of History, MA student Cristina Wood will tell a data-informed story about the Ottawa River using song.

Billy Joel, Nickelback, Fifty Shades of Grey and Other Casualties of Taste Shaming

In some form or another, we’ve all been exposed to musical taste shaming. If you’re a fan of The Eagles, Drake, Rush, or perish the thought, you are passionate about the music of Nickelback, you have probably received more than your share of barbs aimed in your direction.

In 2015, Canadians reacquainted themselves with the expression “Trudeaumania.” After ten years of Conservative Party rule under Prime Minister Stephen Harper, the election of the Liberal Party of Canada leader Justin Trudeau as the nation’s... More

Listen to the CBC All in a Day Interview with Professor Marc Furstenau   Last year, the Faculty of Arts and Social Sciences and the Film Studies program (School for Studies in Art and Culture)... More

Music student Rebecca Cowal holds a small sound mixer up to her webcam and points somewhere off-screen towards a new microphone setup. “I had no idea. I didn’t know anything about sound recording, or live... More