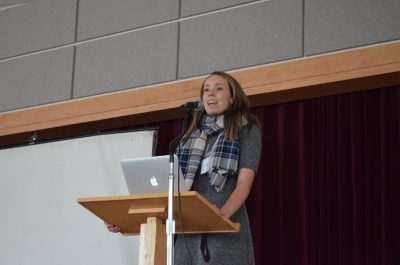 Before I share my musings, I would like to sincerely thank our presenters and workshop leaders for sharing such thought provoking work, and the conference organizers for putting me in the simultaneously wonderful and impossible position of providing some conclusion to the day. That said, its fitting that, at the end of a day dedicated to migrating landscapes, I would be left with changing thoughts, transforming and flowing in all directions. And if I were to draw one overarching theme for today, it might be just that: movement and direction. There’s no doubt that today we’ve covered vast ground, both intellectually and geographically. We traversed the globe through a myriad of case studies, and considered issues of relocation and migration. We considered how our embodied experiences engender knowledge, and what might come from walking in the footsteps of other. We talked about our work in terms of movement and position, unidirectional versus multi-directional, top-down versus bottom-up, periphery versus center. Heritage values themselves were seen to move, placed upon or removed, imposed on or grown from, and always transforming and transformational. And, being concerned as we are with the past, it seems we not only move and think in terms of space, but in terms of time, but again in a fairly directional, and spatial way. We bring up the past, we try to go back into it, and most of all we attempt to work with it. Yet we move, or, to allude to Walter Benjamin in parallel with last year’s closing remarks, we are inevitably hauled, kicking and screaming, into the future.

Heritage is often framed as a field that grew from negative reactions to just such forward movement. There is a rich literature, such as that of Hewison or Wright, that frames heritage as a form of regressive nostalgia, a desperate clinging to the past. And while we may be moving, as it was argued this morning, into a new era of ecological bias, this too could be read as a reaction to new and terrifying change in the form of environmental degradation. Rodney Harrison argues that in our postmodern world, we are in fact even more motivated by risk than we were in the modern era. What is the role of heritage conservation, preoccupied, as it has been with stasis and continuity, within a world in constant flux? Are we the stewards of stability, or must we embrace evolution?

I was struck today by the number of presentations that included the word development, and to what a degree the heritage conservation field has, in fact, embraced change and non-linear notions of time and progress. And not only in terms of material conservation – moving buildings, embracing ruins, even conserving sites as testaments to change – but changing our own field. New materials of study, such as sound, and new methods, or even ontologies, are increasingly acknowledged and included. Today, we’ve also seen presenters use, build upon, critique and otherwise work with legislation, conventions, charters, declarations and development plans, both contemporary and historical, not to disavow practice, but improve it. It seems to me that the old school of ‘preserve as found’ is itself in a state of flux and progression, and that arguments that mark sharp distinctions between theory and practice are out of step. Thankfully, positionalities do change, power dynamics change, and I hope that the relatively recent renaming of the School of Indigenous and Canadian Studies, and our acknowledgement of our location on unceded territory, are signs of just such a new direction.

And this brings me to us, our movement, the heritage movement. In the face of our own changing paradigms, changing values, and changing moralities, the idea, not only of where we are going, but where we should go, are for me particularly forceful. This is only compounded in the context of the study of cultural landscapes, faced as we are with global environmental change and continued socio-economic pressures. Do we conserve material, and let values change, or do we preserve values, and allow material to change? Do we let things evolve naturally, or do we intervene? As we push the boundaries of the field, what, not just materially, but intellectually, do we hold on to and what do we let go? Should we be looking forward or should we be looking back? After today’s discussion, and to end with some optimism, it seems to me that the heritage field is uniquely positioned to respond to these questions and the changes of our time, so long as we to stay on the move.