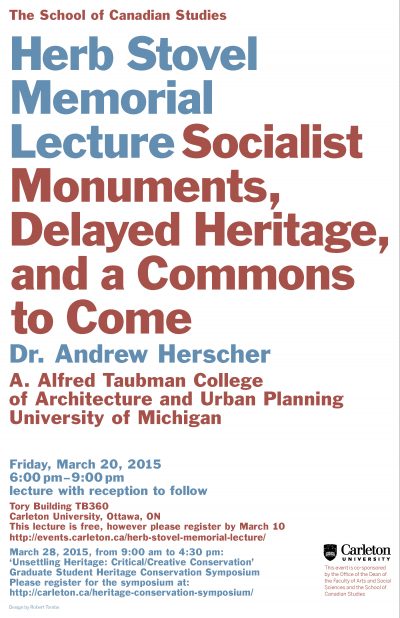 Socialist Monuments, Delayed Heritage, and a Commons to Come

Dr. Andrew Herscher (University of Michigan) will be presenting his talk, “Socialist Monuments, Delayed Heritage, and a Commons to Come” as part of the annual Herb Stovel Memorial Lecture. The lecture will be followed by a reception in the lobby of the Tory Building.

This lecture is free and open to the public, but please register here.

Abstract: Socialist Monuments, Delayed Heritage, and a Commons to Come

Workshop: Conservation by Other Means

How are objects, spaces, and practices conserved not only by intentional effort, but also as a by-product, side effect, or result of other efforts or processes? If there is a “conservation by other means,” where might we look for it and how might we understand its consequences for conservation-as-such? In this workshop, we will informally share examples of what a conservation by other means might consist of and discuss its implications for thinking about and doing heritage conservation more generally.

This event is co-sponsored by the Dean of the Faculty of Arts and Social Sciences and the School of Canadian Studies.

Andrew Herscher is an Associate Professor at the University of Michigan with appointments in the Taubman College of Architecture and Urban Planning, Department of the History of Art, and Department of Slavic Languages and Literatures. He is the author of Violence Taking Place: The Architecture of the Kosovo Conflict (Stanford University Press, 2010) and The Unreal Estate Guide to Detroit (University of Michigan Press, 2012); he also co-founded the Detroit Unreal Estate Agency, an open-access platform for research on urban crisis using Detroit as a focal point. He is currently working on two books, the first about art, commemoration, and counter-politics in post-Yugoslavia and the second about satellite imagery, human rights, and crimes against telehumanity.