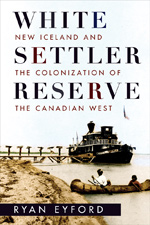 Ryan Eyford, Carleton History almunus (M.A. 2003) and Associate Professor in the Department of History at the University of Winnipeg has published the book White Settler Reserve: New Iceland and the Colonization of the Canadian West (UBC Press, 2016).

In 1875, the Canadian government created a reserve for Icelandic immigrants on the southwest shore of Lake Winnipeg. Hoping for a better life in Canada, many of the New Iceland colonists found only hardship, disappointment, or death. Those who survived scurvy and smallpox faced crop failure, internal dissension, and severe flooding that nearly ended the project only six years after it had begun.This innovative book looks beyond the experiences of these Icelandic immigrants to understand the context into which their reserve fits within the history of settler colonialism.

Ryan Eyford reveals that the timing and location of the Icelandic settlement was not accidental. New Iceland was one of several land reserves created for Europeans by the Canadian government in the late nineteenth century. Canadian leaders hoped that group settlements of immigrants on Indigenous lands would help realize their ambitious plans for western expansion.

By juxtaposing the Icelanders’ experiences with those of the Cree, Ojibwe, and Metis people they displaced, Eyford makes clear the connections between immigrant resettlement and Indigenous displacement. By analyzing themes such as race, land, health, and governance, he draws out the tensions that punctuated the process of colonization in western Canada and situates the region within the global history of colonialism.