Melissa Armstrong Discusses her New Book “An Ambulance on Safari” 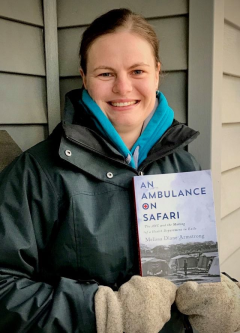 History Alumna Melissa Armstrong sits down with Carleton’s Nick Ward to discuss her new book An Ambulance on Safari: The ANC and the Making of a Health Department in Exile. A short excerpt is included below, with the full article, “Discussing ‘An Ambulance on Safari’” available online.

Recent History PhD graduate Melissa Armstrong’s new work is the only published book-length analysis of the political and medical history of the African National Congress’(ANC) Health Department that cared for anti-apartheid exiles during the struggle for liberation.

Titled An Ambulance on Safari: The ANC and the Making of a Health Department in Exile, Armstrong, a former Vanier Scholarship winner, spent time researching in Alice, South Africa at the ANC’s political archive where she examined over 3000 documents related to the ANC’s Health Department. She also conducted interviews with healthcare workers affiliated with the Department – individuals who treated the thousands of anti-apartheid activists, militants and migrants who were physically or mentally injured as they fled South Africa to neighbouring countries to avoid arrest or worse.

As explained by Armstrong, the Health Department would not only treat people in need of care, but it would also go on to assist with legitimizing the ANC as a political entity and thus cultivate international anti-apartheid sentiment.

Quite amazingly, she wrote much of An Ambulance on Safari, her first book, while training to become a medical doctor at the University of Saskatchewan.

During a rare break in her schedule of working on the wards, Armstrong was able to track down an unused hospital room to have a phone conversation outlining her sure-to-to-be-influential new book, her Carleton experience, and her remarkable academic career.