Please join the Institute of African Studies and the History Department for a screening of the film “Hero – Inspired by the Extraordinary Life & times of Mr. Ulric Cross.” (Click here to register.)

Following the screening, you are also invited to join us for a talk by Dr. Michelle Moyd. 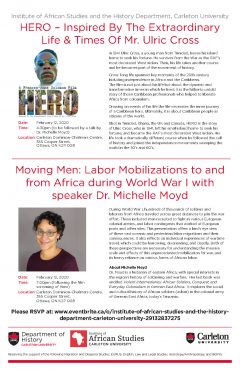 “Hero” Film Synopsis:
In 1941 Ulric Cross, a young man from Trinidad, leaves his island home to seek his fortune. He survives from the War as the RAF’s most decorated West Indian. Then, his life takes another course and he becomes part of the movement of history.

Cross’ long life spanned key moments of the 20th century including independence in Africa and the Caribbean.

The film is not just about his life but about the dynamic and transformative times in which he lived. It is the hitherto untold story of those Caribbean professionals who helped to liberate Africa from colonialism.

Drawing on events of his life the film recreates the inner journey of a Caribbean hero. Watch the trailer online.

Shot in Trinidad, Ghana, the UK and Canada, HERO is the story of Ulric Cross, who in 1941, left his small island home to seek his fortune, and became the RAF’s most decorated West Indian. His life took a dramatically different course when he followed the call of history and joined the independence movements sweeping the world in the 50’s and 60’s.