Origin and Cultural Ownership of a Canadian Icon 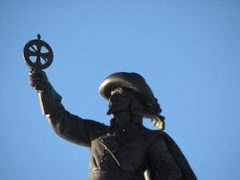 Created to mark the 400th anniversary of Samuel de Champlain’s passage up the Ottawa River in 1613, this special exhibition by the Pinhey’s Point Foundation reviews the evidence on the origin of the Champlain or Cobden astrolabe and explores its contested status as a cultural symbol.

The exhibit was created with the assistance of students in a Carleton University graduate class in Public History.  Since it first visited the Department for our 2013 colloquium Champlain on the Anishinabe Aki, it has been loaned to the Champlain Trail Museum in Pembroke, the Archive of the Jesuits in Canada in Montreal, and Sainte-Marie among the Hurons in Midland, Ontario.