Home / temp / Who publishes in Refuge: Canada’s Journal on Refugees? A reflection on author affiliation, knowledge production and geographic representation

Who publishes in Refuge: Canada’s Journal on Refugees? A reflection on author affiliation, knowledge production and geographic representation

By Rachel McNally and Nadeea Rahim

Read the response to this webinar published by Refuge in their April 2021 Newsletter.

In 2019, the editors of the journal Migration Studies embarked on a self-reflection process about the geography of submissions to the journal, resulting in a blog post asking the critical question: Does the gap in migration research between high-income countries and the rest of the world matter? They concluded that the “vast majority of migration research seems to be originating in high-income countries.” Inspired by this blog post, LERRN began to publish analyses of some of the most-cited journals in forced migration studies, including a blog post on the Journal of Refugee Studies and a blog post on Refugee Survey Quarterly. [1]

This blog post analyzes Refuge: Canada’s Journal on Refugees. Refuge is “a non-profit, open access, peer-reviewed academic journal in the field of forced migration” that has published interdisciplinary work in both English and French since 1981. Over the 6-year period between 2015 and 2020 analyzed for this blog post, Refuge published 55 single-authored articles and 48 co-authored articles, for a total of 103 articles.

With 85% of the world’s 26 million refugees and 3.6 million Venezuelans displaced abroad currently hosted in the Global South, and 73% hosted in neighbouring countries to their countries of origin, this blog post considers the geographic focus and authorship of the published articles. All the refugee and displaced persons population figures in this blog post come from UNHCR’s 2019 Global Trends report and reflect the numbers of forcibly displaced persons at the end of 2019.  Using the United Nations Statistics Division (UNSD) classification of countries (“developed regions” as Global North and “developing regions” as Global South), we analyze Global North and Global South participation through categorizing the articles based on the authors’ institutional affiliations at the time of publication and the countries where these institutions are located. This approach is limited as it does not consider other forms of geographic identification (such as nationality data, which was not available for this research) or connections within the region that it is the focus of the research. Instead, this analysis considers the question of whether scholars from the Global South require either a co-author from the Global North or an institutional affiliation in the Global North to be published in some of the most-cited journals in the field. Evidently, the Global North/South classification is a vast simplification that obscures significant differences within these categories, but it is a useful shorthand to examine questions of geographic representation and to represent some of the dynamics involved in the political economy of knowledge production (such as access to research funding).

Refuge: Canada’s Journal on Refugees was established as a Canadian journal in 1981 at a time of significant growth in research relating to the resettlement and integration of Indo-Chinese refugees in Canada. Since the beginning, it has continued to publish important and critical analysis of Canada’s resettlement programs and Canada’s refugee determination (asylum) system. The journal is based at York University in Toronto, Canada and receives funding from the Social Sciences and Humanities Research Council of Canada (SSHRC). As a result, it is not surprising that nearly half (47%) of articles include at least one author based at a Canadian institution: 23 single-authored articles are written by authors based in Canada, while 25 co-authored articles include at least one author based in Canada. In addition, of the 90 articles with a regional focus, 40% of them focus on refugees, asylum seekers, or other groups of migrants in Canada. Although the journal is Canadian focused – with an emphasis on Canada’s Journal on Refugees in the title – the reach of Refuge has extended well beyond Canada, both in terms of authorship and in terms of the geographic focus of the articles. Authors were based in 21 different countries, with the largest numbers based in Canada, the United States, the United Kingdom and Australia. For 12 of the countries, there was only one article written by an author or co-authors based in that country (Israel, Qatar, Portugal, Iceland, Slovakia, South Africa, Uganda, Mexico, Croatia, United Arab Emirates, Singapore and Switzerland). 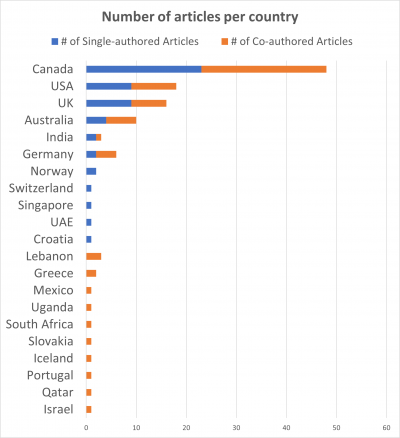 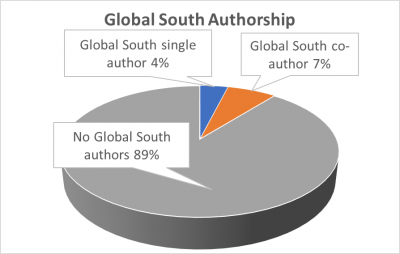 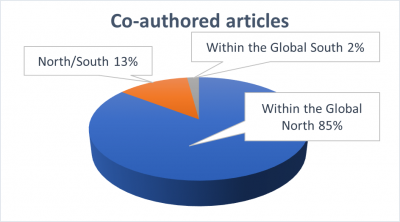 The articles published cover issues related to displacement in every region of the world. However, when compared to the percentage of refugees hosted in specific countries and regions, as well as to the percentage of UNHCR’s population of concern hosted in that country or region, some regions are under-represented while others are over-represented. As mentioned above, of the 90 articles with a regional focus, 40% of them focus on refugees, asylum seekers, or other groups of migrants located in Canada, but less than 1% of the world’s refugees are located in Canada. Other countries in the Global North are also over-represented compared to the percentage of displaced persons they currently host. In contrast, looking to a region in the Global South, Sub-Saharan Africa is under-represented, since 5% of the articles are about displaced persons in this region, but it hosts 31% of the world’s refugees and 39% of UNHCR’s population of concern. A similar pattern of under-representation is evident with the Middle East and North Africa, Latin America and the Caribbean, and the Asia and Pacific regions. 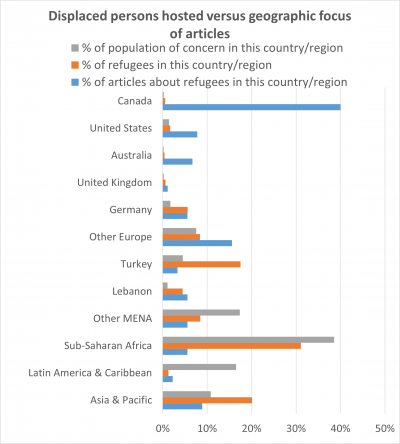 Each article was coded according to the population of concern to UNHCR: refugee, asylum seeker, internally displaced persons (IDP) or “other” to capture groups of (forced) migrants who fall outside UNHCR’s population of concern, with some articles covering multiple groups. As expected, most of the articles (77%) focus on refugees and 16% of the articles focus on asylum seekers. Only four articles look at internally displaced persons (IDPs), reflective of a broader gap in the field of research related to internal displacement. Reflecting the expansion of refugee studies to include other groups of (forced) migrants, 27% of articles look at migrants who are not refugees, asylum seekers, or IDPs, including forms of migration that sometimes overlap with asylum-seeking.

Refuge is a bilingual (English/French) journal given that those are the two official languages in Canada. Thus, it is notable that all abstracts are available in both languages. However, in practice the journal is mostly in English. Only 5 out of 103 articles published in the last six years were in French. Except for one author based in Switzerland, all the authors writing in French were based in Canada. Given that there are many other French-speaking countries that also host significant numbers of refugees, particularly in Africa, there may be potential to expand the journal’s French content to feature some of these perspectives.

Unlike Journal of Refugee Studies or Refugee Survey Quarterly, where only a few articles are open access, Refuge is an entirely open access journal. An open access journal would certainly increase access for readers, particularly those from practitioner communities, people with displacement experience, or readers in the Global South who do not have access to institutional journal subscriptions. However, it is not clear what effect open access may have on the decisions of authors to submit to the journal or on the patterns identified above.

The purpose of LERRN’s series of journal analyses is to provide a starting point for conversation within the journals and in the forced migration studies field more broadly on questions related to knowledge production, access, and representation. There remain many unanswered questions, including whether the published articles reflect the same patterns as submissions, what patterns might be revealed by additional demographic data about authors (such as nationality), and why authors choose to submit to specific journals. Refuge is clearly aware of the questions raised in this analysis. It is notable that the most recent issue in 2020 was co-edited by LERRN partner Dr. Maha Shuayb from Lebanon and featured both Global North and Global South perspectives. It is also notable that the recent call for papers on the theme of “Refuge in the Time of Pandemic” explicitly invited “contributions of authors from the Global South as well as both refugee support workers and other frontline practitioners (e.g., health workers).” For several decades, Refuge has served as a critical publication outlet for Canada’s vibrant forced migration studies community and as a platform for critical analysis of issues related to refugees and asylum seekers in Canada. It has since expanded beyond Canada, but it has great potential to expand even further into a more global journal featuring a wider diversity of perspectives.

[1] We would like to thank the additional authors from the blog post on Refugee Survey Quarterly for their contributions to the methodology that guides this post.