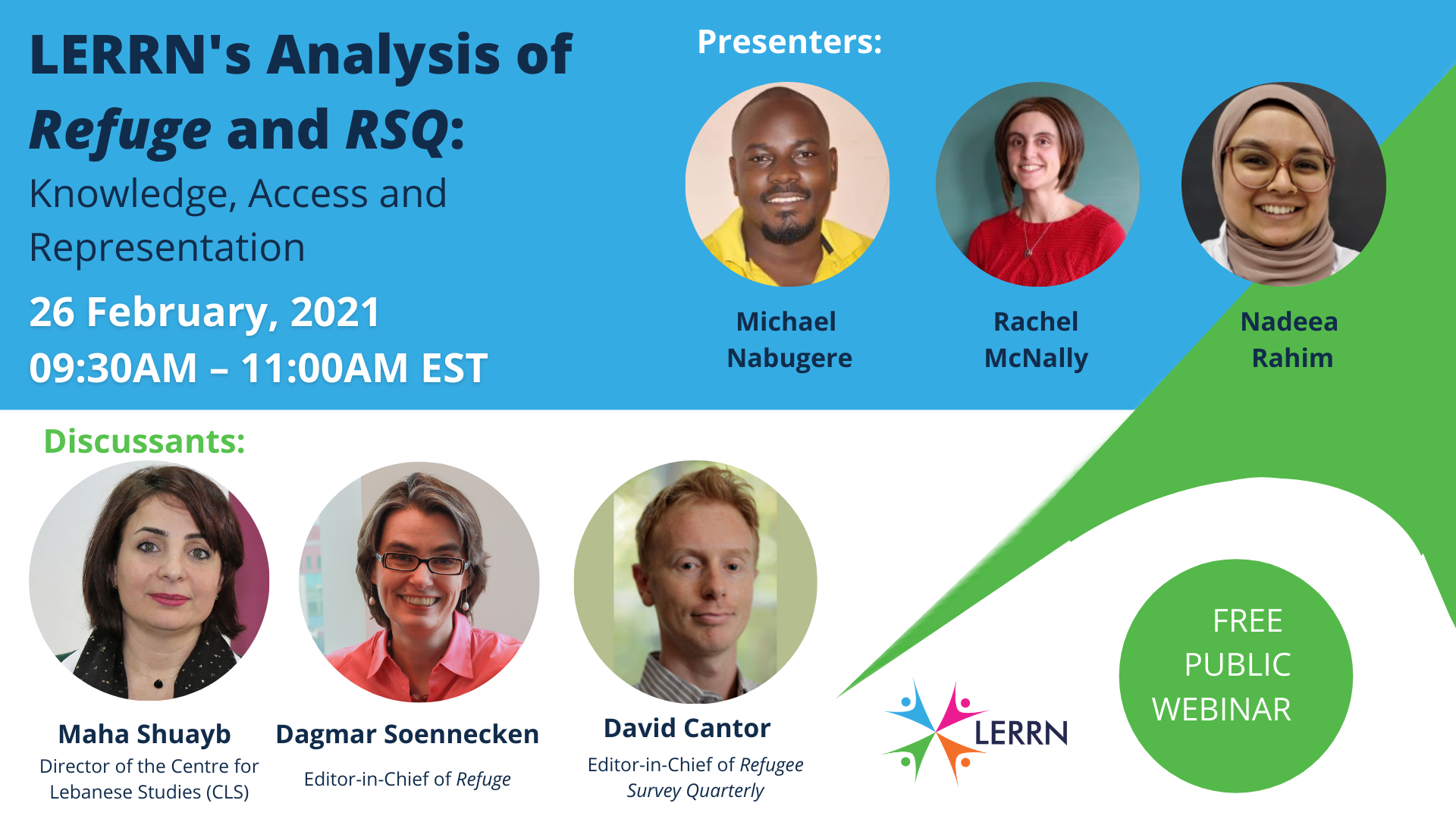 Read the response to this webinar published by Refuge in their April 2021 Newsletter.

On February 26, 2021, LERRN hosted a webinar discussing LERRN’s recent analysis of the journal Refugee Survey Quarterly (RSQ) as well as a similar analysis of Refuge: Canada’s Journal on Refugees. Nearly one hundred people from Europe, North America, Africa and the Middle East tuned in online to engage in this conversation. Inspired by a blog post by the editor of the journal Migration Studies – entitled “Does the gap in migration research between high-income countries and the rest of the world matter?” – LERRN examined the authorship and content of all the articles published in these two journals in recent years. The webinar began with a presentation of the results by Rachel McNally, LERRN’s Knowledge Mobilization and Translation Officer, Nadeea Rahim a Research Support and Program Officer with LERRN, and Michael Nabugere, one of the co-authors of the RSQ analysis and currently Settlement Commandant at Bidi-Bidi Refugee Settlement in Uganda. Following the presentations, LERRN partner Maha Shuayb, Director of the Centre for Lebanese Studies, and the editors of the two journals, Dagmar Soennecken and David Cantor, commented on the results and offered their own reflections on the issues of knowledge production, access and representation.

Although authors based in many different countries were represented in the articles published, authors based in Canada, the UK and the USA wrote the highest numbers of articles. In addition, the focus of the research tended to be on forced migrants located in Europe, Canada, and other countries in the Global North, which host small numbers of forced migrants compared to countries in the Global South. Given this imbalance, Michael Nabugere raised the important question of whether the areas that receive the most attention in academic research on forced migration are the same as the priority areas for the majority of forced migrants around the world. Maha Shuayb explained that

Representation in journals is important because without access to these publications, it is challenging to influence big debates in the field. She suggested that including diverse voices in journals is part of the broader process of decolonizing and localizing knowledge production in forced migration studies and beyond.

The participants emphasized the importance of situating the analysis of journals within broader structures of knowledge production. Maha Shuayb highlighted that what appears in published journals is just a snapshot of the research process. She discussed how barriers for Global South scholars exist all along the research process, including a language barrier, limited access to library resources, a bias toward citing Northern scholars and seeing their work as more legitimate, funding that is only available to scholars based at institutions in the Global North, exclusion from the agenda-setting stage of research projects, processes for research projects that do not consider local contexts, and unequal partnerships that limit Southern researchers to being data collectors. She wondered

“How can young scholars who cannot afford these journal subscription fees be able to connect to this academic debate?”

In this context, Dagmar Soennecken explained the benefits of the open access model that Refuge follows in terms of making the journal accessible to a wide range of readers. David Cantor pointed to the sometimes sensitive political context within which refugee research takes place as well as career incentive structures that lead Northern scholars to prioritize publishing in peer-reviewed journals.

Although academic journals are important because of their central role in the academic literature, knowledge about forced migration comes in many forms. Participants acknowledged that practitioners in humanitarian organizations often do not have the time to read full journal articles, which emphasizes the importance of knowledge translation and mobilization activities to make research results more widely available. Alternative ways of sharing academic research, such as blog posts, are more accessible to non-academic audiences like practitioners and people who have experienced displacement. David Cantor and Michael Nabugere encouraged attendees to consider the critical question

“Who is the audience for our research and for whom is knowledge produced in our field?”

David Cantor reflected that the field needs to think more critically about how the knowledge we are creating is used in practice.

The participants reflected on next steps for the journals and for the field of forced migration studies more broadly. Dagmar Soennecken suggested that “the most important thing is that journals are talking about accessibility and are willing to make these changes.” Refugee Survey Quarterly recently announced its new Editorial Board, which includes scholars based in Ethiopia, Lebanon, Ghana, India and Colombia. It also recently published a special issue – “Improving Attention to Internal Displacement Globally” – that focuses on a type of displacement that is concentrated in the Global South. In terms of the language barrier for authors who do not speak English as a first language, both editors explained that the journals are able to connect authors with copy-editing and other language-related support. Refuge has recently connected some authors from the Global South with such support to take their valuable research on the impact of COVID-19 on refugees and bring the language up to a level where it is ready for publication. The editors encouraged scholars to reach out to editors to ask questions about the publication process or to ask if their work fits within the focus of the journal.

LERRN looks forward to continuing these conversations and our work amplifying the voices of scholars in the Global South.

Stay tuned for further conversations on this topic!

This report was prepared by Rachel McNally, LERRN Knowledge Mobilization and Translation Officer.