Research in the Rand Lab is rooted in environmental and analytical chemistry, and crosses with biochemistry and toxicology. These streams of research enable our group to develop analytical and biochemical tools to assess the impact of pollution in North America, and to provide knowledge that leads to safer consumer products. Our research also addresses emerging issues in environmental health, including the interaction between different kinds of environmental stressors (e.g. nutrition and environmental chemicals) that may alter relationships between exposure and effect. We focus on three streams of research:

Research in the Ianoul Lab focuses on developing novel plasmonic nanomaterials for sustainability, investigating molecular processes at the interface in search for safer medications, and developing analytical methods for sensing. The Lab uses advanced spectroscopic and microscopic techniques to investigate the molecular mechanisms of action of novel antimicrobial peptides. We design nanomaterials with unique optical and electronic properties for applications in photo-induced catalysis, photovoltaics, and sensing. We develop novel ultrasensitive analytical methods based on surface enhanced optical techniques to monitor the presence of environmental contaminants.

The Tsopmo Lab is interested in the structures of food molecules and their functionalities. Our research focuses on the hydrodynamic properties of proteins and peptides obtained from by-products of food processing and study how they can be used to improve the texture of foods by performing structural characterization using spectroscopic and microscopic techniques.

We investigate the role of antioxidant molecules on health, lipid, and glucose absorption and metabolism. Oxidative damage to biological molecules increases the risks of developing many chronic diseases, and antioxidants molecules are useful in mitigating the risks. Using cellular models and molecular dynamics, the Lab is involved in the discovery of new antioxidant compounds from foods and human milk that reduce inflammation, inhibit lipid and glucose absorption, or decrease the differentiation of fat cells.

Vitamins and minerals are important for various physiological functions, and the Tsopmo Lab examines how the bioavailability of these nutrients is affected in foods grown in soil-less environments (i.e. vertical farming).

Metals such as hexavalent chromium and arsenic are toxic because of their oxidative stress induced damage to nucleotides and biomolecules. We are interested in finding peptides in foods that can reduce their toxicity by converting them to stable, non-toxic species.

The primary research interest of the McMullin Group is studying chemical interactions between microorganisms and their environment through the biosynthesis of natural products. Natural products are ecologically significant as they enable specific species/strains to compete for resources or occupy an ecological niche. While natural products are important socioeconomically, for example as drugs, often unwanted chronic exposures have adverse health effects. These effects are often poorly characterized. To facilitate toxicological experiments and exposure assessments for better hazard characterization, chemical standards are required. This involves evaluating the toxigenic potential of ecologically relevant species/strains, purifying the principle toxins and elucidating their chemical structures. This type of research can have important implications for evidence-based decision making, toxicology and chemical ecology.

Students in the group develop transferable technical skills by (1) growing microorganisms to produce metabolites, (2) purifying and structurally characterizing chemicals, (3) developing analytical or metabolomics methods, and (4) assessing the biological activity of purified compounds. We currently focus on natural products produced by cyanobacteria and fungi.

The motivating scientific interest of my research is the role of fungal metabolites in determining population structure. I became interested in this during my postdoctoral work where I observed that distributions of marine fungi on wood seemed to be partially determined by the production by some species of anti-fungal metabolites.

Few academic research programs in North America work in the area of natural pro ducts from fungi and the program produces highly qualified personnel that will be able to seek careers in the pharmaceutical and environmental industries. This effort reflects also the Canadian Government priority to engage more scientists outside medical schools in the problems of medical research.

There are three lines of research conducted in the Miller laboratory.  Thefirst area of research is into the link between damp housing and health.  The second area is the role of endophyticfungi in conifer needles.  Thirdly we conduct research on toxinsin food.

The Hosseinian Group conducts research in the area of phytochemistry/food biochemistry, focusing on:

Mass spectrometry (MS) has proven to be a powerful analytical tool in many scientific fields for nearly a century. Advances made in soft ionization techniques such as electrospray ionization (ESI) and matrix-assisted laser desorption ionization (MALDI) have expanded the use of MS to the biological sciences, allowing biomolecules to be ionized and sampled in the gas phase without fragmentation. These advances have been echoed in an explosion of publications over the past 20 years that have used MS as a tool to illuminate information pertaining to a biological question. The majority of MS-based bioanalytical studies to date have focused on cataloguing the species present in a sample at a static moment in time. Although this is important, measuring the dynamics of a system in response to a stimulus not only aids identification efforts, but offers mechanistic insight into the cellular processes involved. Gaining a better understanding of these dynamics, often expressed through a change in concentration or in the degree of modification, enhances the accuracy of cellular models, assigns functional roles to the identified species, as well as highlights new diagnostic and therapeutic strategies. The research program of the Smith group focuses on developing novel methods to efficiently measure biomolecular dynamics in living systems with the downstream goals of elucidating disease biomarkers and further characterizing biosynthetic and biochemical pathways.

The Smith Lab uses mass spectrometry as a tool to probe the dynamics of various biomolecules. At present, we mainly conduct research in the area of protein analysis (“proteomics”) and lipid analysis (“lipidomics”). The laboratory is equipped with high-resolution hybrid quadrupole time of flight, triple quadrupole and linear ion trap mass spectrometers. All of these instruments achieve ionization via electrospray ionization and are coupled to high performance liquid chromatographs. The lab additionally houses two gas chromatography-MS systems, one equipped with a headspace sampler.

Trimethylation Enhancement using Diazomethane (TrEnDi) is a published technique developed by Professors Jeffrey Smith and Jeffrey Manthorpe at Carleton University. The method increases the sensitivity of mass spectrometric detection by assigning a fixed, permanent positive charge to amino groups. It allows for increased and predictable sequence coverage for peptides in proteomic analyses, and increased limits of detection for several important lipid classes in lipidomic analyses.

The Smith Lab uses microfluidic devices to manipulate biological samples in a highly efficient manner to elucidate protein dynamics and post-translational modification patterns using MS in conjunction with TrEnDi. Through studying the dynamics of protein abundances or the modes in which they are modified in cells that are stimulated in some manner (or that are either diseased or healthy), our research will help define how cells communicate with each other, their environment and themselves.

Although lipids have been studied for decades and have been largely regarded as energy storage or structural molecules, recent progress in lipid research has revealed many novel and important roles for lipids in cellular signaling. Many classes of lipids are easily analyzed by mass spectrometry; however, some are more difficult to observe. The Smith Laboratory will focus on developing novel methods to identify lipid species in the context of complicated biological samples. To date, the development of TrEnDi has achieved this goal by increasing the sensitivity of some lipid classes over an order of magnitude. Ultimately, we will apply the novel methods that are developed to investigate lipid dynamics in biological systems to aid our understanding of the roles they play in cellular life.

Our group is broadly focused on synthetic organic chemistry, particularly on applications in biochemistry and engineering. Our approach to research is highly collaborative with other academic researchers and corporate partners.

In partnership with Prof. Jeff Smith in Chemistry, we developed TrEnDi (Trimethylation Enhancement using Diazomethane, which uses innovative applications of diazomethane to enhance the analysis of certain biological molecules, particularly certain lipids and peptides, via mass spectrometry through the introduction of fixed, permanent positive charge(s). Extension and expansion of this work is ongoing, with current directions focused on the development of new derivatization reagents, expansion of the scope of substrates suitable for derivatization, and facilitating new fragmentation pathways in tandem mass spectrometry that will facilitate structure identification.

Our group is also currently engaged in a collaboration with Prof. Ron Miller (Carleton University, Department of Mechanical and Aerospace Engineering) to understand the chemical fate of antioxidants in lubricating oils. This work involves the synthesis of various compounds proposed to be the oxidized antioxidants. This work is aimed at improving the understanding of how lubricants are oxidized and their functional lifetimes.

Our group’s expertise and previous work encompasses the total synthesis of natural products, including lipids, polyketides and terpenes; as well as methodologies, including metal-catalyzed organic processes.

Dr. DeRosa’s Lab, the Laboratory for Aptamer Discovery and Development of Emerging Research (LADDER), seeks to develop biosensors and “smart” materials based on DNA aptamers, single stranded DNA or RNA sequences that specifically bind to a diverse variety of targets. Projects in our lab draw on inorganic, organic, materials, and nucleic acids chemistry. Several main research themes are outlined below:

1) Human and Ecosystem Health: We have several projects where we apply our aptamer technology to problems in health. We have developed MRI and CT contrast agents that use aptamers for targeting. Working with colleagues in neuroscience, we have developed an aptamer-based tool to study, and perhaps one day treat, Parkinson’s Disease. We have also discovered aptamers for cancer detection. 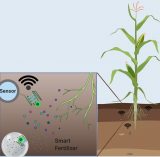 2) Molecules and materials for sustainability: Our research on aptamers for controlled release applications is being to “smart” fertilizer technology. Fertilizers play a critical role in increasing agricultural outputs but at high economic and environmental costs. The smart fertilizer concept involves the use of aptamers to recognize chemical signals that are exuded from crop roots to trigger the release of nutrients on demand, lowering costs for the farmer and lessening environmental impact.

3) Food Safety, Security, and Analytical Methods: The presence of unsafe levels of contaminants in food is a growing public health problem that requires new technology for monitoring the food continuum from production to consumption. Aptamers for food safety targets, such as parasites, bacteria, and mycotoxins, have been discovered and tested in the LADDER. Our main interest is to develop low‐cost, sensitive, robust biosensors for the detection of targets, mycotoxins in particular, at early stages in the food production chain (e.g. farm and grain elevator).

For more information, visit the LADDER.

The Avis Lab studies both fundamental and applied aspects of food and plant microbiology. More specifically, we are interested in microbial food spoilage and plant pathology. Our main focus is the use of alternatives to synthetic chemicals to control the growth of microorganisms on crops and during food storage. The resulting effects of this research is meant to increase food yield and reduce food loss, which can have a positive impact on food security and environmental sustainability.

Our laboratory uses a multidisciplinary approach including basic microbiology, biochemistry, bio-analytical and bio-physical chemistry, membrane and lipid chemistry, as well as molecular biology, genetics, and genomics.