Home / CCE Brokering / Building a Community with Homes for All

Building a Community with Homes for All 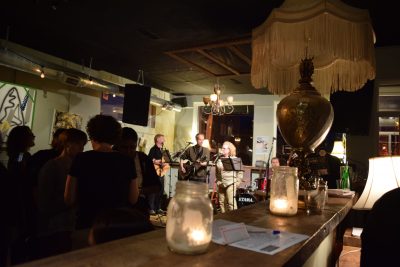 Performers entertained guests at ATEH’s Building a Community with Homes for All event. ©Omar Elsharkawy

April 21st marked Ottawa’s Alliance to End Homelessness (ATEH) researcher community networking event titled “Building a Community with Homes for all”. The event took place at Pressed Café in Ottawa and was free and open to the public.

The Alliance is a member-driven non-profit organization, representing over 50 local organizations, concerned community members, and persons with lived experience, who work together – inspiring action, generating knowledge and informing a community-wide effort to achieve an end to homelessness in Ottawa.

As soon as I entered the room I was amazed by the number of people that showed up. It was a packed house. The event started off with a few words from one of Carleton’s Vice President’s (Research and International), Nimal Rajapakse, on the importance of community-networking events. Following that was Juno award winner Jesse Stewart with a stellar instrumental performance using just cardboard boxes, drumsticks, and cymbals. 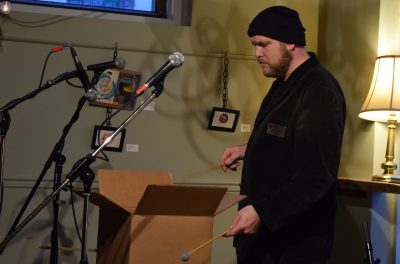 Jesse Stewart makes music using some cardboard boxes at ATEH’s Building and Community with Homes for All event. ©Omar Elsharkawy

It was then time to network. Students, community members, and researchers made connections through a networking bingo game customized for work relating to homelessness. Participants were asked to find and introduce themselves to different people working on ending homelessness in different capacities. Business cards were being exchanged and lots of conversations were had.

Dahlia Namian, Professor at University of Ottawa’s School of Social Work, found the networking aspect of the event very helpful, particularly with respect to connecting with community folks in Ottawa. “My community links are mostly on the Quebec side so I thought this would be a great first step to meet researchers and community members in Ottawa.”

Sean LeBlanc, Chairperson of DUAL (Drug Users Advocacy League) attended because homelessness is an issue that matters to him on a personal level, having experienced homelessness in the past. Some say the issue of homelessness doesn’t get a lot of attention from researchers and policy makers. On this, Sean says, “I’ve been doing community based research for years now and it has gotten better, but there’s still a long way to go.” The Alliance’s event was an indicator of increased interest, although Sean says there is a lot more work to be done. 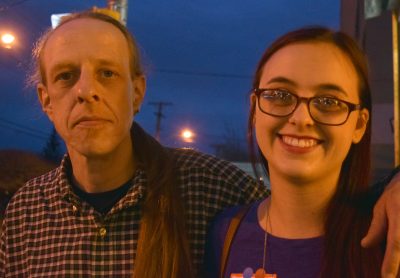 Sean Leblanc and Catherine Hacksel pose for a picture at ATEH’s Building a Community with Homes for All event. ©Omar Elsharkawy

Jacqueline Kennelly, Professor at the Department of Sociology and Anthropology, and convener of the event, said she was very happy with the turnout and that folks had the opportunity to network with each other in a casual manner. Jacqueline says she’s already received emails from people she met at the event about collaborating on projects. On community-campus engagement (CCE), she says that CCE is absolutely vital to her work and that academics should be giving back to the communities in which they live and work. 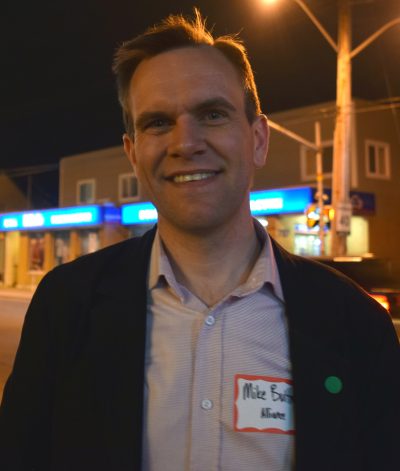 Mike Bulthuis, Executive Director of ATEH, poses for a picture at the Building a Community with Homes for All event. ©Omar Elsharkawy

Mike Bulthuis, the executive director for ATEH, announced that ATEH’s 2015 Progress Report on Ending Homelessness in Ottawa will be released on April 26th. In an interview, Mike indicated that he was very happy with the number of students that showed up at the Alliance’s event. “It’s very promising to see young researchers taking an interest in the issue.”

Mike says Ottawa has about 1,000 people in shelters in Ottawa every night and that’s a major problem. However, for every person in a shelter, there are more people living on the streets or at friends’ houses temporarily. Currently, there are about 10,000 people on Ottawa’s waitlist for affordable housing. In addition, there are 40,000 households in Ottawa paying more than 30% of their income on rent. This 30% threshold is set by the federal government, Mike says. These households are therefore paying too much for rent and consequently cannot afford a healthy diet, education and other basic needs.

Jacqueline says, “While the problems of homelessness are very depressing, there is an increased energy and momentum around the issue of homelessness.”