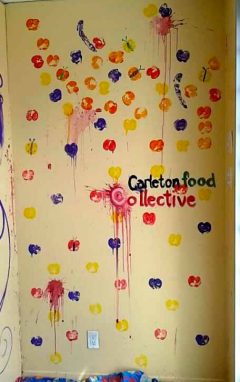 A wall covered in self-painted apple prints at the Carleton Food Collective.

The increasing engagement in community campus partnerships is not just a phenomenon that occurs between professors and community organizations. Students are also taking matters into their hands to become more engaged, and one way they are doing it is by setting up alternative food initiatives (AFIs) in their communities.

As noted in a report written by CFICE partners at Meal Exchange and Ryerson University, AFIs can range from farmer’s markets to community kitchens and community gardens, but the major thing they have in common is a focus on community building. According to the report, “[Community building] was widely recognized as being a driving force behind the success of campus food projects.”

According to Torre, re-starting the Collective was a big challenge, especially since there were no other volunteers on board. This is a challenge because there’s a lot of financial and organizational responsibility that would ideally be shared between a number of people. Torre and Petite also faced a lot of bureaucracy and resistance from the undergraduate student government when trying to acquire the funds needed for the Collective to restart. However, Torre believes that having patience with these processes is vital to an AFI’s success. In the end, the sense of community that’s generated, along with the addition of a new food option on campus, is worth the hard work. 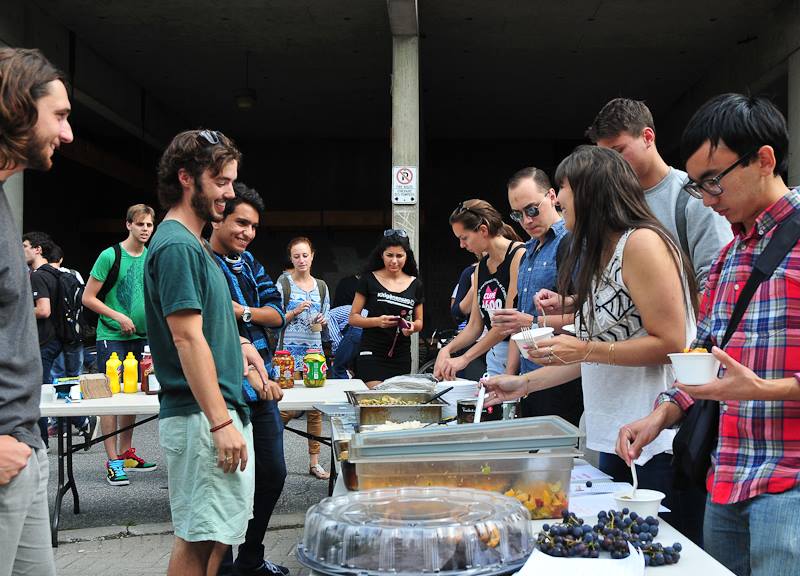 Students gather around a table full of food prepared by the Carleton Food Collective.

As Jacob Boutwell, a community member, says: “The inclusivity of the group is inherent to its collective nature. Since it is a collective without executives, it is open to anyone in the community who has the drive to help run it within the mandate. It’s also a great opportunity for community members who have an interest in food politics /social justice/ collective governance to come and give their energy to a project and have their opinions count as a part of the collective.”

Torre says AFIs are also important because they add much needed diversity to food options on campus. For example, the Carleton Food Collective serves vegan and gluten free food options during its servings, options that are harder to find at the various food outlets on campus. While monetary donations are accepted at servings to help cover food transportation costs, the food the Collective serves is free for everyone. The Collective helps reduce their costs by accepting produce donated by grocery stores—food that would normally get thrown out. By accepting these donations, the Collective works to combat food waste and alleviate food security simultaneously. 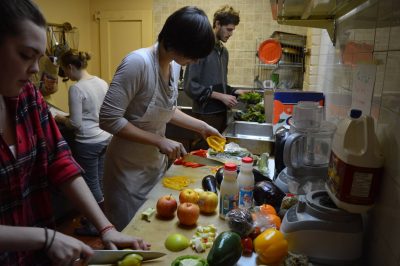 Members of the Carleton Food Collective help prepare meals for serving to students.

Having their prep kitchen off-campus helps the Collective become more involved in its immediate community. Many community members often join in cooking and transporting the food to campus. The Collective also organizes a number of events on- and off-campus throughout the year, including movie screenings, educational events and gardening sessions. These events are open to students and the wider community.

To anyone wanting to start an AFI in their community, Torre says to listen and see what the needs of the community are and cater to those needs. “There’s always a grassroots movement going on somewhere, so join that community, share solidarity and then try to grow the movement together.”