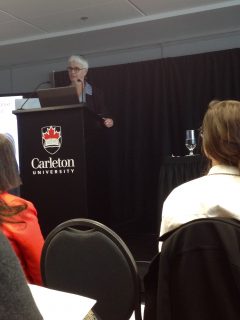 On Friday September 30th, the Gender Equality Measurement (GEM) Symposium, co-sponsored by the Engendering Public Engagement, Democratizing Public Space project and the VAW Hub of CFICE, took place at Carleton University in Residence Commons.  The event ran from nine to noon and brought together various members of the community, including feminists, scholars, activists, and government officials.  The morning consisted of a lecture by keynote speaker, Sally Engle Merry, a Professor of Anthropology at New York University and Faculty Director of the Center for Human Rights and Global Justice at the New York University School of Law, followed by a panel discussion and questions from attendees. 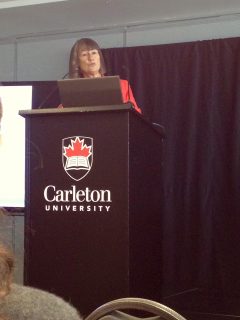 Sally Engle Merry discussed her most recent book, The Seductions of Quantification: Measuring Human Rights, Gender Violence, and Sex Trafficking, which explores power structures and the implications of the turn to quantification and categorization, using violence against women, human rights and sex trafficking as the specific sites for her exploration.  Included in the lecture was discussion of the effects of measurement on governance and social policy in shaping how we understand the world.  Coding violence does not reveal truth but rather creates it.

Sally Engle Merry also discussed the significance of what she termed expertise inertia and data inertia. Expertise inertia involves power structures, particularly the tendency of those who have influence in the construction of surveys for the measurement of gender violence to use or adapt existing templates developed by countries with the resources to carry out expensive national surveys.  Data inertia refers to how data is collected and who has the resources to use that data to tell a story.

The panel consisted of Kamari Clarke, from Carleton University, Holly Johnson, from University of Ottawa, Cherry Smiley, from Concordia University, Lucie Lamarche, from Universite du Quebec a Montreal (UQAM), and Debra J. Liebowitz, from Drew University.  Panel participants responded to some of the key themes in Engle Merry’s book and applied them to different contexts according to their own scholarly background and expertise.  “Everyone had a different angle, which I think made it so much richer,” said Diana Majury, CFICE’s co-lead for the Violence Against Women Hub and one of the event’s organizers.

The questions raised and the discussion generated during the panel discussion really brought the issues to light. There was a recognition of how complicated and politically-charged the work of quantification, indicators, and surveys is.  At the same time it highlighted how important data is in rendering some things visible and in identifying knowledge and policy gaps.

The critiques and concerns that feminists have concerning quantitative work were also apparent. 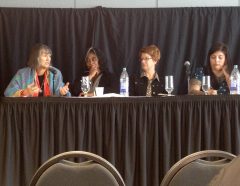 In analyzing this approach it’s important to identify power structures and who is encoding and consolidating the statistics. As was brought up in the discussion, the definition of what constitutes violence in terms of physical, sexual, economic, and psychological impacts as well as issues of severity, frequency, and a number of other variables present huge problems and variations that seriously complicate the understanding of violence against women and the efforts to categorize and measure it.

Diana was very pleased with how the event ran. “Getting a room full of people committed to these issues and working on them is just so exhilarating! And inspirational!,” she said. With this in mind, Diana said having all these pieces brings people together to think and strategize how to move forward.