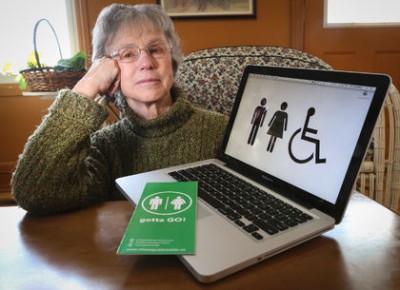 On March 31, 2016, the Ottawa Citizen released a piece updating readers on the progression of the GottaGo! campaign. One of the partners of CFICE’s Community Environmental Sustainability Hub, GottaGo! is an advocacy group campaigning for a network of public toilets in Ottawa. Back in October 2015, they were in the process of lobbying the City of Ottawa to include public toilets in the plans of two Light Rail Transit stations. And now, they have succeeded in working with the city to build a mobile-friendly map of the public toilets available in Ottawa. The map includes information about the hours during which the toilets are open, how accessible they are, and whether or not there’s access to baby changing tables.

Here’s a snippet from the article:

“We’re really excited,” said Joan Kuyek, chair of the GottaGo! campaign. “It gives us what we need in terms of knowing what’s in the city and knowing what else needs to happen to create a really good network. We didn’t have that before.”

City council voted last September to compile and publish data about public washrooms so third-party web developers could create an app to map out the locations.

The city collected data on 190 washrooms in its own buildings and also noted such things as the availability of baby-changing tables, building hours of operation and level of accessibility. After translating the information into French, the city released the data in February.”