[Link to report below]

The City of Ottawa, Canada’s capital, is growing and transitioning. Growth is fueled by an influx of new residents attracted by the region’s employment prospects and quality of life. Growth is also fueled by a development industry operating on a decades-old model of low-density planning, and by consumers who prefer low-density housing. The transition, on the other hand, is spurred by recognition among government policy-makers that alarm about environmental issues necessitate changes in how cities, including Ottawa, spread into surrounding farmland. Changes are driven by the costs of providing and maintaining services (e.g., roads, sewage and water, transit, emergency services, etc.) into low-density suburbs, by fears about the impacts of climate change, and by an urgent need to cut greenhouse gas emissions, especially from transit and power supplies, to slow global warming.

According to a large body of research on global climate change and on down-scaled regional projections, Ottawa’s weather is changing. In recent years, there have been more severe weather events resulting in flooding, ice storms, short periods of dramatic temperature variations (freeze-thaw events), and hot spells with drought conditions. Ottawa’s weather changes might be characterized as more emphatic or severe, rather than as different patterns from what the city has seen in the past. While government policies at three levels (federal, provincial and municipal) generally reflect an urgent need to recognize risks to lives and property from climate change, consumers and the housing development industry, who combine to generate an entrenched economic growth model, seem to be unreceptive and unwilling to alter a half-century of (relatively) affordable housing production. The contradiction between the policies written by environment-minded public officials and the actual practices on the ground signifies a debate that can only grow more intense along with growing alarm about the environment.

Ultimately, both private and public stakeholders must acknowledge the impacts of urban form on greenhouse gas (GHG) emissions, and, conversely, the impacts of climate change on cities, for any meaningful progress on urban sustainability to ensue. This paper, co-authored by Gary Martin and Patricia Ballamingie, is therefore intended to inform discussions between industry and government policymakers in and beyond Ottawa, Canada about climate change and potential impacts on residential development regulations and corresponding industry practices.

Click on the image below to read the full report. 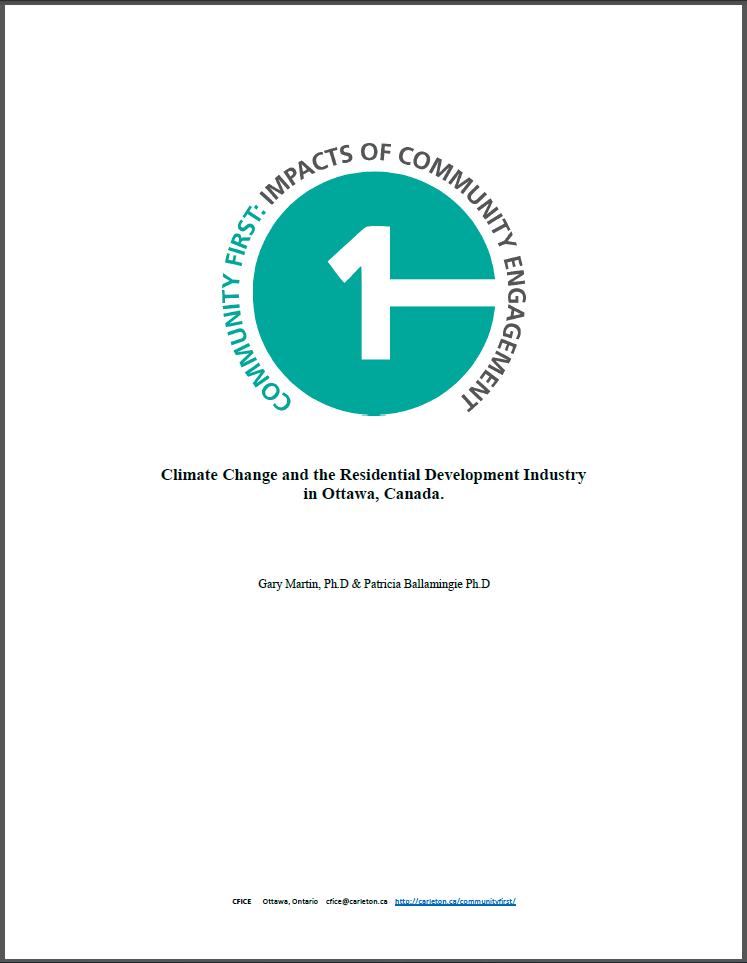