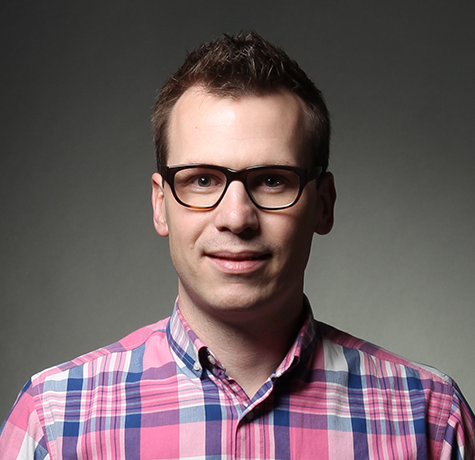 In CFICE’s “Conversations With” series, we interview community-campus engagement (CCE) practitioners to get their insights on CCE. Interview conducted by Chelsea Nash, CFICE Communications Research Assistant.

Lee Rose is a curious social innovator with an knack for working across systems to drive change. He led the creation and development of the Community Knowledge Exchange while working as the Director of Community Knowledge at Community Foundations of Canada, and now serves as its founding Managing Director. In this piece, Lee ponders the power dynamics between funders and grantees with us and shares his thoughts on how we can start shifting our focus to asset-based funding.

What is your background in community funding?

I kind of fell into philanthropy. If you asked 10-year-old me what I wanted to be when I grew up, I can guarantee that I’d never have said “I’m going to be a director at a national network of community foundations.” I think, like most people who are working in the social change space, my journey to where I am is thanks in large part to serendipity and a curiosity about finding meaningful ways to do good, better.

I started my work at Community Foundations of Canada (CFC) about four years ago. I’ve also sat on boards of charities – both national and local – and now lead the work of the Community Knowledge Exchange, a social change agency that recently spun out of being a project of CFC.

When I started working at CFC, it was the first real time that I was on the “other side” of the sector – working for a network of funders, instead of being connected to the work on the grantee side of things. I remember in my first few months at CFC that I noticed that people were being really really nice to me at conferences. While waiting in line for lunch at one such conference, an established leader from a large private foundation leaned toward me and chided, “they’re only being nice because the word foundation is on your lanyard.” And here I thought they were talking to me because I was a nice guy.

Over the course of my tenure at CFC, I began to get a better understanding of the awkwardness of the grantor-grantee relationship. Patterns of power and control. Who gets to decide what’s an important issue to fund? I began asking myself some tough questions – slaying a few sacred cows in the process. Do donors and funders really know best? Do grant review teams made up of mostly people with privilege and largely devoid of those “end users” who have “services delivered upon them” really make sense? Why do foundations hoard money in large endowments? Who really has the power?

I’ve always been a bit skeptical of funders who have stated priority areas – not because that’s a bad idea – focus and commitment are good things! More because I’m curious about how they identified them. Is it on the whim of a donor, or are they in response to actual community needs? I really need to understand how they got to those priorities and what’s the research behind that.

Also, funders are terrible at burdening grantees with so much process and paperwork in the application process. Just getting all the paperwork together is a massive undertaking – the prize isn’t effecting change in your community, it’s making sure you got all your financial statements, partnership letters and budget spreadsheets uploaded before an arbitrary deadline. Congratulations! You won. Now please wait 4 to 6 weeks for us to review your application and politely decline it. There has to be a better way! 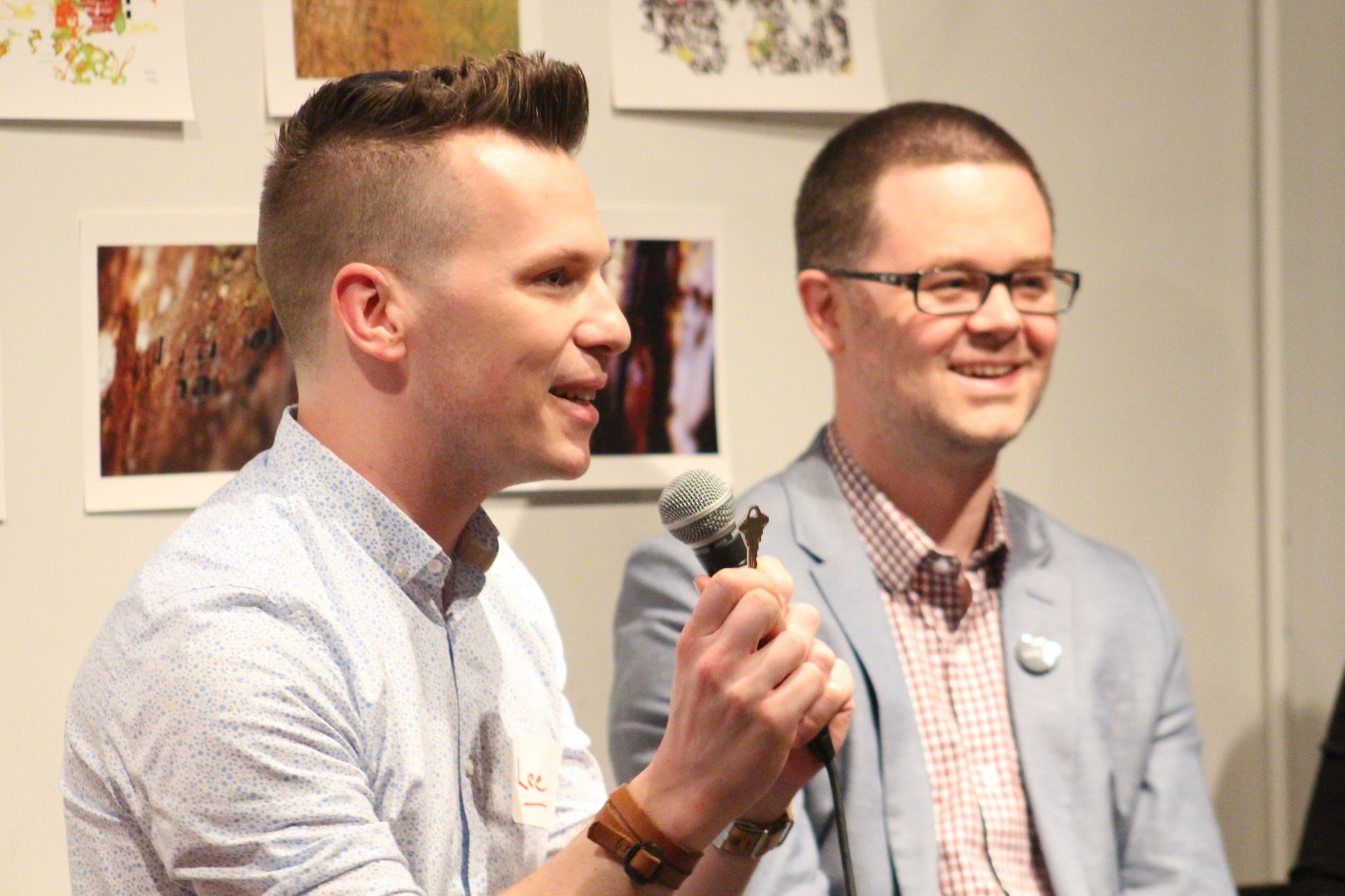 I actually just said it as a joke in a moment of frustration when I was applying for funding for a project. Like this is an excellent idea – I should be the one taking applications from funders who want to get behind it. Imagine sending a decline letter to a potential funder saying “We received your application to fund our project, but unfortunately we are not in a position to accept your funding because {insert polite reason for decline here}. Wouldn’t that be liberating? Imagine the shift in power, the reframe that’s possible when you flip the proverbial iceberg and take an asset-based approach. So instead of starting from the position of having to wait for funding, start from something like “I’ve got a really cool idea. ‘I’m going to invite six funders to apply for this and I’m going to select which funder’s going to work with me.”

Do you think it’s possible to make such a big shift, practically speaking?

I’m hopeful. And I’m starting to see it happen in my own work at the Community Knowledge Exchange (CKX). When you think about it – it’s all about power and permission. Why do I need to wait for a funder to grant me permission to do something? Can I get going on my own? I recognize that it’s not always possible – but you don’t always need to wait for permission to get going. I tend to take the position that we’re moving ahead with a project or initiative that we believe in, and rather than ask a funder to support it, I’ll invite them to come along because they’ll also see the value in what we’re doing. It’s also an interesting way to bring multiple funding partners together.

Again I think the biggest barrier to making this shift is that we’re stuck in this waiting for permission mindset. We need to break the cycle. And while I realize that flipping the entire machine that is the current funding model by tomorrow is a tad unrealistic – getting people to realize that their social change work is actually more important than waiting for a grant proposal is the first step. 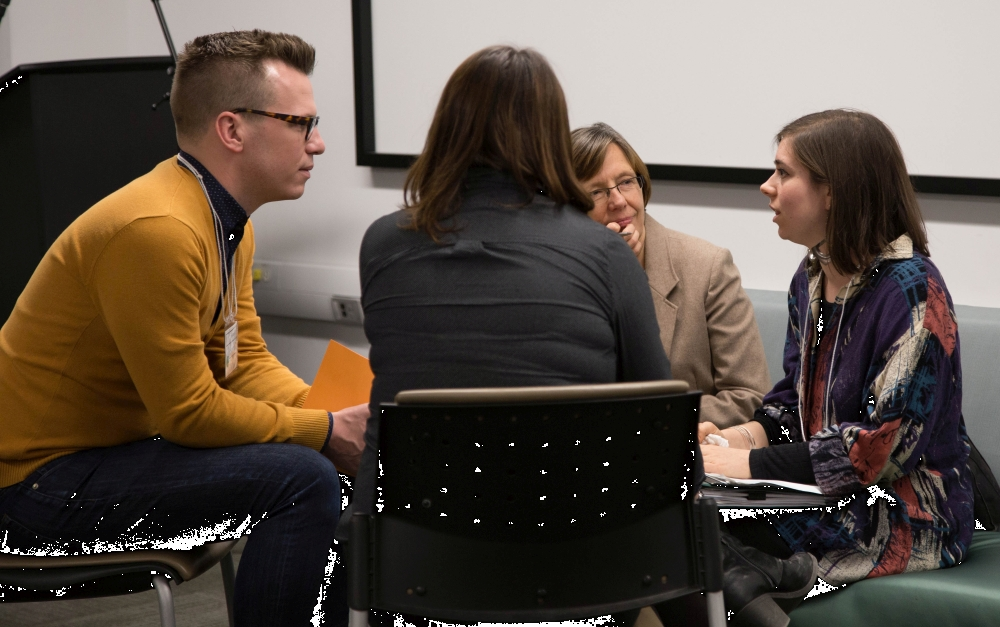 At the CFICE January 2017 evaluation symposium.

What do you think the biggest barriers are now to achieving that kind of dynamic?

I think it’s people being stuck in entrenched and inflexible systems who are stuck in old ways of doing things, and are more interested in maintaining the status quo than actually achieving social change. So I’m thinking of funders who require grantees to estimate how many pens they’re going to use in Q3 of year two of a three-year project in order to get the funding, and are really resistant to any changes or emergent learning that happen along the way. And I also think of grantees who can’t imagine that they actually have the capacity to do stuff because they’re so used to working in a system that suffocates them and restricts their sense of agency to ‘you must get funder approval’ to do stuff. So that’s it. People and patterns.

But there is hope, and here’s an example of an entrenched system actually able to adapt and respond to create change: The way that the Government of Canada was able to mobilize to resettle 30,000 Syrian refugees in Canada in less than six months. That required massive systemic reaction and responses to something. So the prime minister says ‘we’re going to welcome 30,000 people,’ and it was impossible. Everyone said it was impossible, and everyone said it’s not going to happen, we’re not going to be able to do it. But the call to action and the moment in time were so important, and people and systems responded in a way that made it happen.

But more often than not, this isn’t what happens. It’s why that same government hasn’t yet brought clean water to every Indigenous community in Canada. The need is as great, if not greater – it’s a devastating challenge that we’ve been trying to address for a very long time. Why haven’t we gotten that figured out and done yet? People and patterns.

I think, in that case, imagine you as an organization could pick a funder that aligns with your values and trusts your judgment to do things and your capacity to actually achieve the things that you’re setting out to do versus, having to report on arbitrary metrics that aren’t actually metrics and that aren’t actually showing a demonstrable impact. And this isn’t a generalization of all funders, because I think there are progressive funders who are doing really cool stuff.

It’s also about building a culture of experimentation and being able to admit that neither the funder or the grantees has all the answers. That’s a big power shift on both sides.

This kind of experimentation happens all the time in the private sector. Companies spend a lot of money in research and development and designing products that never see the light of day – there’s a culture of R&D and investing in trial and error that just doesn’t exist in the social change sector. Part of it is because we can’t really take chances with people’s lives, there’s that human element. But, I think that there is room for funders to loosen the slack, to trust organizations. You’re on the ground in your community, you know what’s best. And we’re just going to trust, and you’re going to let us know, and we’ll learn along the way, and maybe next time we’ll do things differently.

Do you think the power dynamic could ever swing too far the other way?

The pendulum has been so far in the funders court for so long, that I think even just a shift back toward the center would be interesting, don’t you?