Home / News / In Case You Missed It: December 1st March to End Violence Against Women

In Case You Missed It: December 1st March to End Violence Against Women 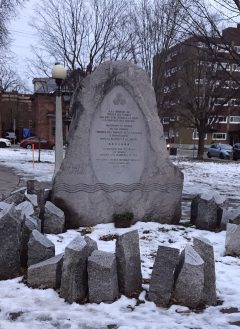 Listening is precisely what we did at the recent December 1st march to End Gender-Based Violence hosted by the Grandmothers Advocacy Network (GRAN), the Ottawa Coalition to end Violence Against Women (OCTEVAW), and Women In International Security Canada (WIIS).

The march began at the Canadian Tribute to Human Rights monument at Minto Park. While participants mingled, GRAN handed out homemade signs and flameless candles for participants to carry on the march to City Hall. At City Hall, participants were welcomed to sit and listen to the evening’s presenters.

The theme of this year’s event was End Violence Against Women in the World of Work. 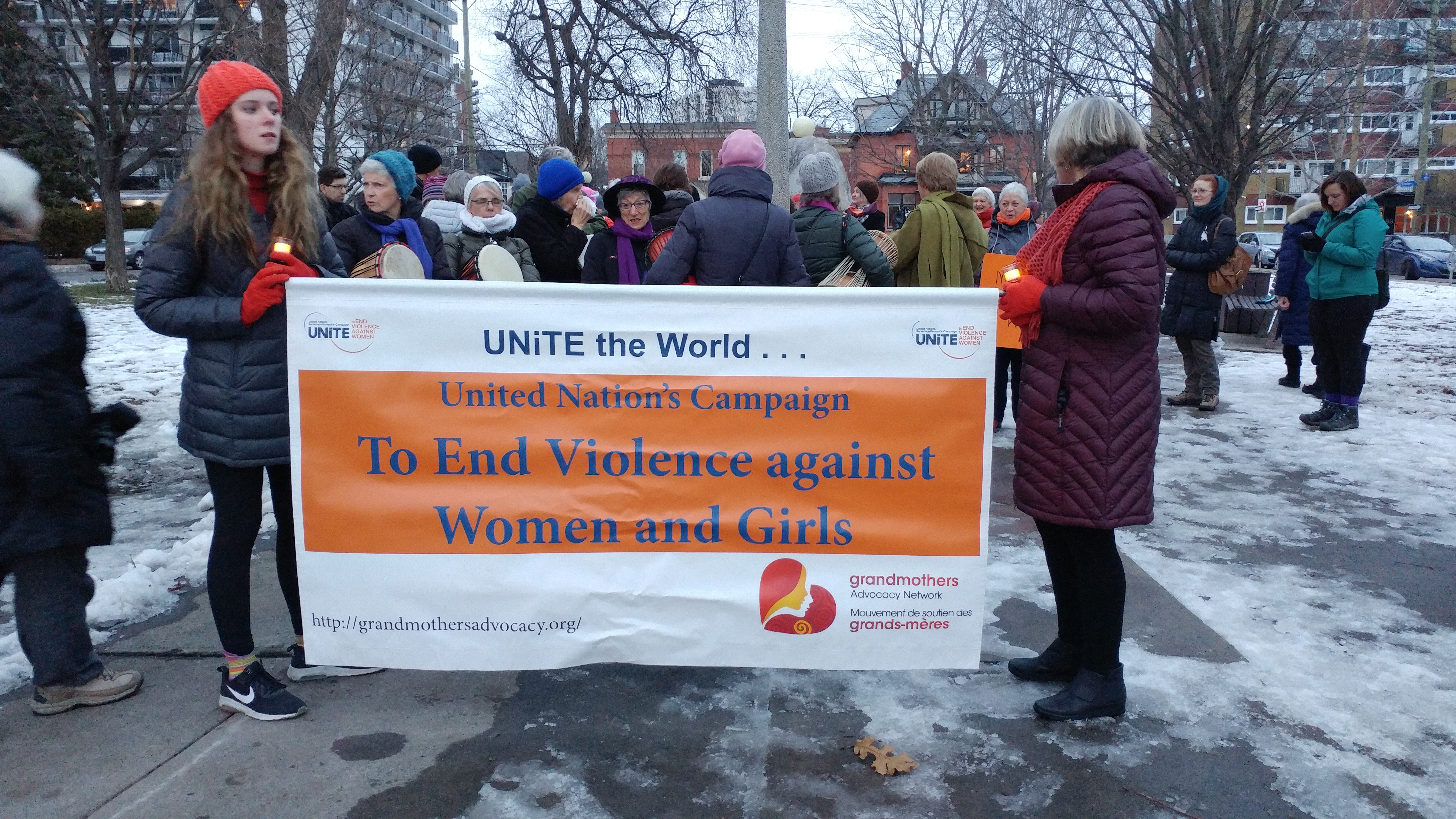 Opening the evening’s remarks was Algonquin elder Annie Smith St. Georges. She spoke of the ten years she spent on Parliament Hill making inquiries for missing and murdered indigenous women. Although an official inquiry was finally opened in 2016, Annie commented that many cases still go unchecked every year. Annie also touched on her work with victims of residential schools. She concluded her speech by reminding the audience that: “we are all the caregivers of human kind” and we must look out for each other. She also noted that Mother Earth is suffering because we have failed to love, care for, and respect her. She likened the world’s treatment of Mother Earth to the treatment of women in society and stated definitively that we must say “no”, “non”, or “ka” to ongoing violence and injustice against women and Mother Earth.

Roua Aljied joined the event in the form of a prerecorded video. The Ottawa spoken word poet was unable to make the event in person, but sent a video of her original slam poem, “Primary Colours”, which narrated the story of a young artist who would paint everything, including herself, and who would later become painted in bruises by the man she loved. The video ended with a powerful message to support the UN policy to end domestic violence.

The keynote speaker of the evening was Mercy Lawluvi, of Immigrant Women Services Ottawa (IWSO). Mercy spoke of immigrant and refugee women experiencing violence, and reminded the audience that “gender-based violence exists across cultures.” On this note, she spoke to the root cause of gender-based violence: inequality. She reminded the audience that racism, poverty, sexism, sexual orientation discrimination, and ableism perpetuate this inequality. 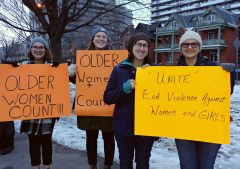 Mercy then discussed the #MeToo movement that sparked in 2016 when women joined together in publicly speaking out about their assaults. She believes this to be the first step in a paradigm shift regarding societal reactions to violence against women. She said that more women are finding the confidence and courage to speak out. And women’s organizations are keeping the movement alive on social media in Ottawa by using the hashtag #WhatNowOttawa.

Mercy continued, saying that despite this encouragement, a significant amount of violence continues to go unreported. She said that immigrant and refugee women are particularly hesitant to come forward. She emphasized the need to create conditions where survivors are treated well, and are supported.

Mercy ended her keynote speech with a message that men and boys need to be included in the conversation as well. She encouraged the audience to challenge stereotypes, and apply a gender equality lens to all public policies: “Let’s not forget that together we can make a difference in the eradication of this societal scourge, particularly in other parts of the world where women and girls are most vulnerable.”

City councillor for Somerset ward, Catherine McKenney took the stage in lieu of mayor, Jim Watson (who did not make it to the event).

Catherine spoke primarily of violence against women and its connection to poverty and a lack of access to affordable housing. She reminded us that we are extremely fortunate here in Ottawa to have access to as many resources that we do (e.g. clean water and education). “However, many of our residents face a very different reality,” she continued, mentioning that trans women, racialized women, and sex workers are particularly vulnerable.

Catherine urged the audience to invest in social services to combat the cycle of poverty that leads to inequality and violence. In this same vein, she reminded the audience to hold our elected officials accountable, at every single level of government, stating that we need to demand that our governmental institutions “invest in the people who need investments.” 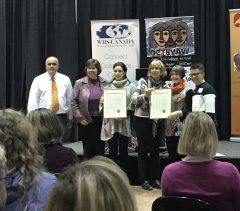 The final speaker of the evening was Anita Vandenbeld, MP representing Ottawa West. Anita iterated that, “we need to do this [work] 365 days a year, not just during these 16 days.” She shared her thoughts on political intimidation that is used across the globe in order to keep women out of the decision-making process and urged women everywhere to use the hashtag #HearMeToo.

If you are looking for more information on how to help end gender-based violence, check out the following organizations (who all had booths at the event):

Persons Against the Crime of Trafficking in Humans (PACT)