Home / News / So you want to apply for a SSHRC partnership grant… How can you respectfully involve your community partners?

So you want to apply for a SSHRC partnership grant… How can you respectfully involve your community partners?

With so many partners involved in CFICE, (at least a dozen universities and 60+ community-based organizations), finding a project design, structure, and common goals across the project posed a challenge, but over the course of the six years of this project, CFICE leaders have learned to put community first through practice.

CFICE spoke to its current Principal Investigator, Peter Andrée, and one of the community partners from the Poverty Reduction Hub, Liz Weaver of Tamarack Institute in Waterloo, to gain their insight into how best to formulate a SSHRC partnership grant application while respectfully involving your community-based organization (CBO) partners. 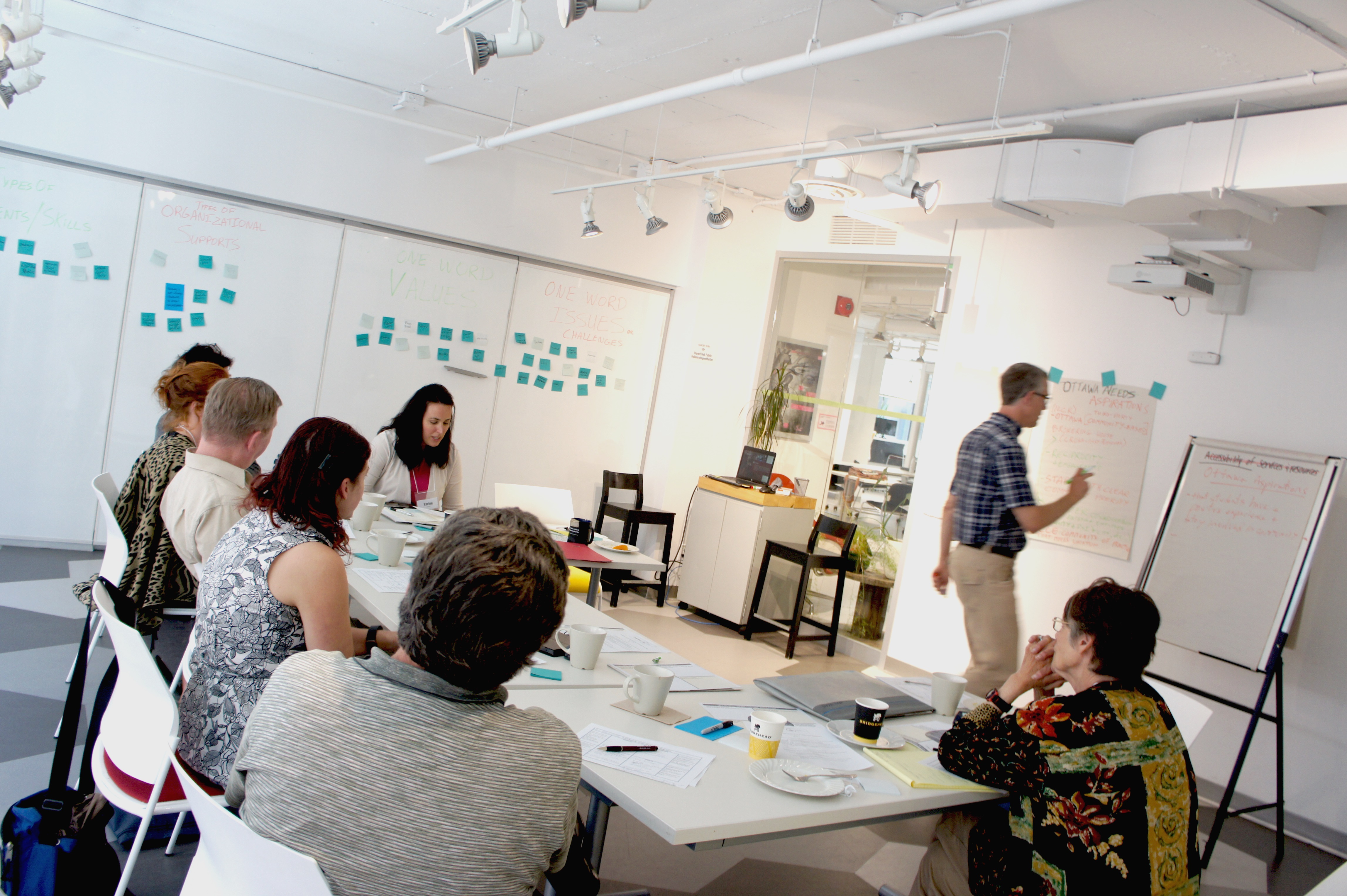 Before you can think about submitting a SSHRC partnership grant application, you need to know who your partners will be. In CFICE’s case, most community partnerships arose out of pre-existing relationships and networks. CFICE’s original Principal Investigator (PI) Ted Jackson approached the Tamarack Institute, for instance, because he already had a relationship with them from his work in the community development sector.

Peter Andrée, the current PI for CFICE, was originally involved in the project as the academic co-lead for the Community Food Security hub. Through his academic research on food security, Andrée had an established network of contacts in that field, and it was through this network that he recruited Food Secure Canada to be a part of CFICE. Andrée said in an interview that connecting with partners in the early stages of the project “was a bit of an organic process” involving the lead academics and the Canadian Alliance for Community Service Learning (CACSL) drawing on their networks.

While you might begin with relationships you’ve already built, that does not mean that those you first approach will necessarily be the right fit. “The question then becomes how much you can ask of [the community partner],” Andrée says. “It’s often about your networks, but then don’t take that relationship for granted…really try and figure out if this is going to be of value [for them] or not.”

Community partners are often asked to write letters of support in the context of a partnership grant application, but Andrée says this isn’t something you want to ask them for right away. “Rather, you first have to have a conversation about what would be in this for you, and what would be in this for me, and how can we make sure that your time is valued and how can this be reciprocal?” he says.

Those initial conversations, of which there might be several, are the key to hashing out things like the responsibilities involved in the project and the potential benefits for each partner. If it’s a SSHRC partnership grant you’re applying for, don’t forget that the project is a research project at the end of the day.

“While it can serve other ends for community organizations, it ultimately needs to be this knowledge generation, synthesis project, so if that is not of interest to them, then you have to have those conversations early on” in order to determine if the partnership will be a good fit, says Andrée.

Consult partners from the get-go 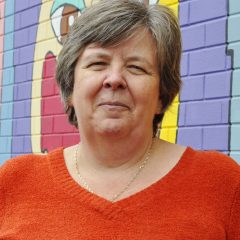 “I think what was really important was the whole notion of community-first,” Weaver told CFICE in a recent interview. For CFICE, “community-first” means fostering equitable partnerships to co-create knowledge that can then be applied to benefit the community context.

“I felt I was informed at every stage of how the process was moving forward…there were lots of emails back and forth with community partners about where the proposal was at,” Weaver said. Then, when the CFICE project got to the interview stage of the SSHRC proposal, community partners were invited to be a part of that process as well.

As a community partner outside of the academic sphere, Weaver said the SSHRC application itself can be a bit “daunting,” but that “the people at Carleton [University] were quite helpful in terms of navigating [that].”

Exchanging as much information as possible and providing assistance with the application process when needed can make your CBO feel included and involved without feeling overwhelmed.

As part of those early conversations, ensuring that partners are on the same page as to the broader goals of the project, and what they hope to get out of the project for their individual organization or research, is an important step in ensuring that expectations are aligned.

“Some of what’s implicit in how we work needs to be made explicit, so that everybody understands the parameters that everybody’s working with,” says Andrée. For instance, if an academic partner is looking to get tenure in the next five years, “that’s got to be on the table,” Andrée says. “What do you need to get tenure? If that’s a certain number of publications, how does that fit in with what you’re planning to do with your community partners?” Expectations that might seem like they are outside of the partnership, but that could influence one’s involvement in the project, need to be acknowledged.

Weaver said “the group has to buy into the shared agenda” of the research project, and thought maybe that was something that was lacking within CFICE’s Phase I. “I think we circled around the shared agenda a lot, and then each of the hubs did their own thing,” she said.

Both Weaver and Andrée identified the need to be in partnership with an organization as a whole, rather than just one person within that organization.

“Chances are people who are still doing the work five years later are not the people who started, and so there needs to be an institutional commitment to the value of the work for that organization,” Andrée says.

And, if you do have organizational or institutional support, and you have aligned goals and expectations, Weaver adds that something else to consider is your partners’ state of readiness. “If you want [the project] to get off the ground quickly, then you want to have groups that have good relationships and people who make decisions relatively quickly,” she said. 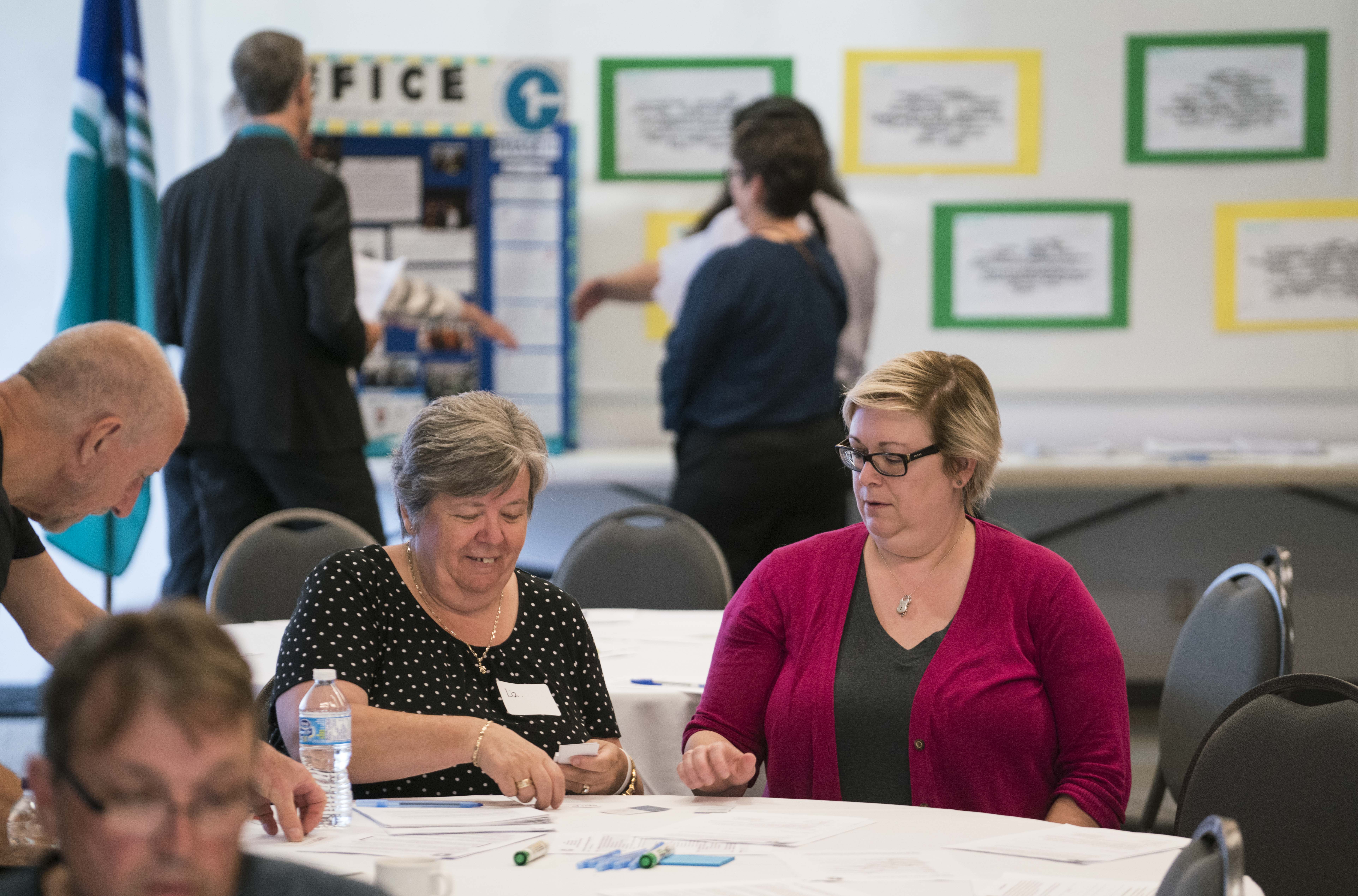 Over the course of CFICE, face-to-face meetings have been found to be integral to the success of partnership projects. These meetings allow honest and frank discussions to take place and can be helpful to address more difficult topics such as power imbalances. Weaver says the first face-to-face meeting for all CFICE partners did not happen until after the funding was secured and the logistics and structure of the project was already in place. She suggests that in hindsight, this might have been done differently, so that the main ‘hub’ structure of the CFICE project could have been better communicated to community partners.

While Weaver said community partners might have been more involved in deciding the overall project structure, when it came to the individual hubs, “we were able—both community and academic—to make decisions fairly quickly with the design of that project.” Weaver said the independence that was afforded to the hubs, in her case the Poverty Reduction hub, was helpful to the community partners and allowed them to have a driving voice behind the work.

Identifying areas where community partners will take the lead in terms of decision making and governance, and outlining areas that fall into the academic purview is important to ensure power dynamics are addressed and relationships are as equitable as possible.

For instance, within the SSHRC partnership grant, the PI, an academic, is ultimately responsible for budgeting and management of funds. That means that they will hold a certain degree of power and governance in the project. It is important to acknowledge this role and how it may impact the partnership in the context of these early conversations.