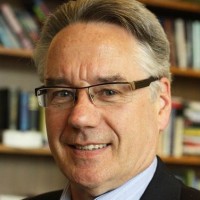 Stephen Huddart is President and CEO of The J.W. McConnell Family Foundation, a national private foundation whose head office is in Montreal. The Foundation has played a leading role in developing and supporting social innovation and impact investing in Canada as a founding partner of Social Innovation Generation (SiG). McConnell’s newest initiatives include Innoweave, The McConnell Reconciliation Initiative, Cities for People, and RECODE.

Stephen’s career spans several fields and includes leadership positions in the private, public and non-profit sectors. Prior to joining the Foundation, he worked with children’s singer Raffi as Executive Director of Troubadour Music Inc. and the non-profit Troubadour Institute. He co-founded and operated the Alma Street Café, a community-based business that for several years was Vancouver’s jazz café of record and where the local chamber of commerce named him Business Person of the Year in recognition of his active support for a wide range of community groups. He subsequently held several executive positions with the BC SPCA, where he introduced innovations in humane food labelling, animal-assisted therapy, and humane education. He has also been a documentary filmmaker, a geophysical observer, museum curator and natural food store manager.

Stephen’s community service commitments include advisory roles with Philanthropic Foundations Canada, and Evergreen CityWorks. He has a Masters of Management degree from McGill University.