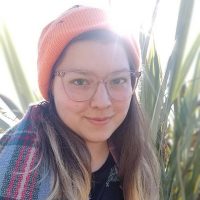 My research examines the connections between Indigenous Futurism and Slavic Futurism and the role of science fiction and popular culture in reclaiming traditional imagery and preserving oral stories. When doing my research I approached my work self-reflexively as not only a settler, but as someone who belongs to the Polish diaspora in Canada. Where I look at Indigenous Futurism in the decolonial context, I approach Slavic Futurism through the lens of Polish artists de-westernizing themselves. I focus on visual art and short films and how they show that culture and tradition can live in a contemporary, futuristic, setting: the Navajo creation story can be set on Mars (The 6th World), and Polish folk heroes can out-smart demons in a space ship (Twardowksy 2.0).