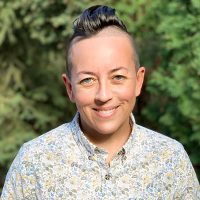 Evie Ruddy is a socially engaged, interdisciplinary artist, and PhD student in the visual culture stream. As a PhD Fellow with the Transgender Media Lab, Evie is helping to develop a database of audiovisual works made by transgender, non-binary, Two Spirit, intersex, and gender non-conforming filmmakers.

Evie’s award-winning, interactive web project with the National Film Board, Un/Tied Shoes, explores their genderqueer identity through footwear. Their audio walking tour, Queering the Queen City, co-produced with Dr. Claire Carter, features place-based stories told by queer, trans, non-binary, and Two-Spirit folx. In 2019, Evie partnered with UR Pride Centre for Sexuality and Gender Diversity to lead Stories That Move You, a portrait and digital storytelling project by and for transgender and non-binary people in Saskatchewan. One of the goals of the project was to disrupt the “cisgender gaze” by collaboratively creating portraits that reflect the participants’ own understandings of their bodies and stories.

Evie has taught courses in Political Science, Sociology, and Women’s and Gender Studies at the University of Regina. They have worked as a producer and reporter for CBC Radio, a freelance journalist, and in communications for a labour union.

As a PhD student, Evie is researching the ethics of media art projects with trans and non-binary participants. They are particularly interested in the role of improvisatory practices for fostering productive spaces for participants to exercise agency over how they are represented.