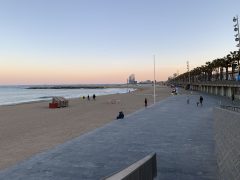 La Barceloneta (neighborhood next to the Mediterranean) 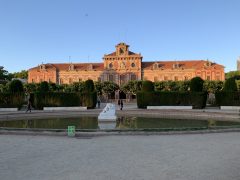 In front of the Palau del Parlament de Catalunya

In May of 2019, I had the opportunity to travel to Barcelona, Spain to conduct field research for my Master’s Research Project (MRP), entitled: “The Politicization of Catalan Secessionism in the 2019 European Parliament Elections”. The trip took place between May 13 to May 30, and the purpose of my travel to Barcelona was to conduct interviews with party representatives of the two main secessionist political parties: Junts per Catalunya (JxCat) and Esquerra Republicana de Catalunya (ERC).

My interest in this field began in 2017; I had registered in a course taught by
Dr. Achim Hurrelmann. To be brief, this course outlined the functions of the European
Union’s (EU) institutions and major policies at a basic level for students learning
about the EU for the first time. This is where my interest in Europe began and my
ideas to write a thesis or MRP began as well. Later on in 2017, an unofficial
independence referendum occurred in Catalonia. This referendum was established in
order to decide whether or not Catalonia would proceed with the independence
movement or not. However, the Spanish government declared the referendum to be
illegal and mass violent raids began orchestrated by the Spanish government via the
Spanish National Police Corps. As I have visited Barcelona on many occasions and
being a native speaker of Spanish, I felt extremely connected with the ongoing
situation and became deeply interested in past and current relations between Spain
and Catalonia. As a result, I put these two interests of EU institutions and of the
Catalan secessionist movement together to create my MRP research question.

Throughout my time in Spain, I remained in Barcelona to carry out interviews
with party representatives from either of the two parties. These interviews were
conducted in order to arrive at a more concrete understanding of how representatives
and secessionist parties are taking advantage of their position in the EU to advance
their concerns. The people that I interviewed for my research would range from high
level representatives to lower level, local representatives of the secessionist political
parties. The interviews were scheduled prior to my departure to Barcelona, but the
majority were scheduled during my time in the city. The interview subjects would
suggest who else would be interested in participating in my project.

Overall, I felt that travelling to Spain was hugely helpful for my project and
thanks to the travel grant I was able to accomplish this experience. With the results
that I have collected I am very excited to continue to complete my MRP project.