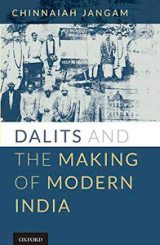 The following short excerpt describes why History Professor Chinnaiah Jangam‘s latest book is included among the top twelve must-read texts on Dalits. The full article by Suraj Yengde, “Twelve books that form part of the arsenal of Dalit writing,” can be found online.

One of the solid arsenals produced by the Dalit community, apart from its resolute commitment to love, forgive and fight, is the articulation, through literature, of human emotion, and writing about bodies and sexuality, compelling rage and justifiable challenges to authority. Over the first half of the twentieth century, besides BR Ambedkar, a proliferation of Dalit writers produced work in multiple vernaculars, writing in a tone that conveyed their selves in the most direct form. The list below attempts to cover some of the recognised and popular works, which gained prominence through their craft and expression. They have given rise to thought, philosophy and meditation, and let many bathe in the pain and joy they put forth.

For generations, Dalits had to be locked in someone else’s hateful interpretation. Their registers of protest and sweetness in life were not only undermined but stolen by their oppressors. Dalits, therefore, had to witness their beauty being manipulated and relegated to an ugly demeanour. Dalit writers, though, used this to their service. Time was made unavailable to Dalits, so they slashed the rigid conventions of temporality and space in their writing.

The list below prioritises the titles according to the availability of the texts in English, and Anglophilic dominance continues to be a limitation to the dissemination of these texts. An enormous genre of Dalit literature, rooted in the ground like a giant old peepal tree, and sharp like winter sunlight, is yet to be taken on and made available by mainstream publishers, who exercise what I call “learned apathy” in their resistance to acknowledging these works. While researching for my book, Caste Matters, I benefitted from the wisdom and literary style of these books. They helped me experiment with my ideas, and I swam into the ocean of words they led me to. Some of the books in the list are staple reading within Ambedkarite families. Mine was no different. I grew up seeing these books at literary festivals, public functions, political rallies and religious events that had cited or mentioned them.

This book explores misconceptions about caste—such as the idea that the British created and politicised caste in the colonial era—and looks deeply at pre-colonial legacies of caste. Set in Andhra Pradesh, it looks within extensive Telugu archives, examining how anti-caste movements were fought and negotiated in that belt. Jangam also points out the stereotypes prevalent in dominant-caste scholars’ work when they write about Dalits. He does not hesitate to call out his own friends from the dominant castes, who have participated in what he calls epistemic violence against Dalits. It is also no less critical of Christian missionaries who were trying to make Dalits into tokenistic sympathetic figures. This book deserves recognition because it will tell you how to write history, engage with sources and produce prescient, hard-hitting knowledge.