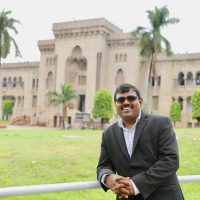 Chinnaiah Jangam is an Associate Professor in the Department of History. He holds M.A. in History from the University of Hyderabad; an M. Phil. in Modern Indian History from Jawaharlal Nehru University, and a Ph. D. from the School of Oriental and African Studies, University of London. He was awarded the Felix Fellowship and Harry Frank Guggenheim Dissertation Fellowship for Doctoral Studies. Jangam was a Postdoctoral Fellow at the International Center for Advanced Studies, New York University (2005-6), New York.  His research focus is on the social and intellectual history of Dalits in modern South Asia. His first book, Dalits and the Making of Modern India, was published by Oxford University Press in 2017. In his book Jangam presents Dalit perspectives on nationalism and argues that Dalits were equal participants in the imagination and the politics of the formation of independent India. Dalits argued for the abolition of untouchability and the ending of caste inequality, with its accompanying humiliations, as preconditions for independence. Dalits imagined a nation founded on principles of justice, liberty, equality, and human dignity. These eventually became the foundational principles of the Indian Constitution drafted under the guidance of B.R. Ambedkar, a Dalit.

My research and writing seeks to illuminate the histories of marginalization and resistance through the lens of Dalits. It attempts to construct an historical narrative of anti-caste epistemology as a stepping- stone to an ethical and egalitarian world. Thus, research and writing have two elements , namely, Dalit experience (life writing) and engagement (both intellectual and political). I am writing a memoir about my mother, Chinnubai Jangam, also known as Devudu Chinnakka. Here the genre of life writing is being used as a critical tool of historic testimony in order to expose the dehumanization of Dalits under the yoke of the Hindu caste system. Another project involves the study of the everyday experience of Dalits in contemporary India and probes the educated Dalit middle class’s subjective experiences by using historical and anthropological tools. In modern India, despite achievements in education and employment, Dalits often get overpowered by caste prejudice even in the urban sphere. I am also translating Gabbilam (The Bat), a Telugu classic, written in poetic form, by Gurram Jashua, in 1941. Gabbilam portrays the everyday experience of Dalits against the backdrop of anti-colonial nationalism and articulates Dalit aspirations.  I am also writing a longue durée history of caste. In contrast to the subject of race, there is little historical and theoretical research on the origins of caste and its historical transformation. This project traces the history of caste back to its precolonial roots in Hindu brahmanical religious and secular texts, works that laid the ethical, social and religious foundations of caste. The aim of this project is to present a caste-scape rooted in long historical processes in order to capture and connect its forms and transformations at different periods in history  and to illustrate the way caste retained its structural content  and ideology.

I also write on the rise of Hindu fascism; anti-Muslim violence; caste-based violence against Dalits; the systematic exclusion of Dalits from public and private institutions, and on Dalit and caste Hindu diaspora in North America.

My teaching focuses on South Asian intellectual, social and cultural histories and their interconnections with that of the rest of the world, from ancient to modern times. I teach courses on decolonization, histories of marginalization and resistance, World history, the Indian Ocean World, Race, and Empire and Emancipatory Politics.

Currently serving as a Chair of the Grievance Policy and Administration Committee of the Carleton University Academic Staff Association (CUASA) for the 2020-22 academic year. Link to the CUASA https://cuasa.ca/about/our-people/

For Union related queries write to me at grievancechair@cuasa.ca