Though she spent the first year of her MA degree meeting with professors and peers online during the COVID-19 pandemic, Ona Bantjes-Rafols has made the most of those connections. Now entering her second year, Ona has developed the same diverse skills she would have in the classroom, plus added abilities to adapt her methods to suit our changing world.

We caught up with Ona on her second (ever) visit to Carleton University’s campus to discuss her work, her specialization in Digital Humanities, and the many bonds she’s forged through Carleton’s History community.

I did my Honours BA in History at Concordia University, where I was lucky enough to take a lot of fantastic seminars, do in-depth research, and present at student conferences, which were helpful experiences in deciding I wanted to do an MA. When I went to my professors for advice on where to go, I was told that if I was looking for a similar environment to the History department at Concordia, I should go to Carleton, where I would find lots of support and that new approaches to doing history were encouraged.

The Digital Humanities specialization was a big draw for me, as I was really interested in learning new ways to make my research accessible to broader publics. When I met my supervisor-to-be Dr. Jennifer Evans, she had so much enthusiasm and so many suggestions for my research that I decided Carleton was the place for me.

It has a tentative title that will almost definitely change, as titles have never been my forte. In “Queering Space: Memories and Maps of Queer 1970s Barcelona” I am taking a new approach to the history of queer life activism in 1970s Barcelona, analyzing this history through a spatial lens and focusing on the personal. As part of my thesis I created a digital map of memories, I am developing a walking tour currently, and I will be conducting oral history interviews this fall.

I’ll be using these different approaches to explore the interconnections of space and memory in relation to the history of queer life during Spain’s complicated political transition.

I am part Catalan, and spent a lot of time in Barcelona growing up. I was always fascinated by my aunts’ and uncles’ stories about growing up during the dictatorship, and in particular the complicated and contested transition to democracy in the 1970s. I found out about the gay rights movements that emerged in the 1970s for an undergraduate research paper, and became really interested in the relationship between queer activism and the political transition in the Spanish State at that time, and all the disagreements that emerged between activists over how best to change their world.

Often, even outside the United States, when people think of queer history, they only think of New York, and Stonewall, but of course there were many movements that emerged in very different political situations and with their own cultural and linguistic complexities that deserve their own spotlight as well. The English-language scholarship on Barcelona’s queer history is quite scarce, so I am excited to introduce more people to these histories.

I am really passionate about digital humanities as a tool for bringing research projects to a much wider audience – although I do actually enjoy academic articles, I know not everyone has the time, or most importantly, the access to read them. The digital sphere also opens up possibilities for communicating research in different ways, visually or orally for example.

I created a digital interactive map based on published interviews with people who involved with the gay rights movement in the 1970s in Barcelona, which was very helpful for me in my research to get a sense of where these moments were happening, what sites were important and for what reasons. It also connected me to people with similar interests which has been wonderful – it can be hard to make connections when you only work from home! I am currently working on the Catalan translation in order to share it with more people in Barcelona and have it serve as a resource for educators and others.

My interest in oral history began during my time at Concordia University, and was central to my MA thesis idea from the start. My initial plan, pre-COVID, involved interviewing techniques like “memory mapping”, where I would ask participants to draw the spaces of Barcelona that were important to them during our interview. I tried to think about how I could adapt that style of interviewing to a remote interview, but eventually decided that I preferred to leave that for another time, and instead focus on asking questions that could bring out their own spatial understandings of their history.

I conducted oral history interviews over Zoom this spring for a side research project on Spanish immigration to Canada, and found that doing interviews through video conferencing is much more difficult than in person – it’s much harder to build trust, and to ease into questions. However, it became very unclear whether I would be able to go to Barcelona for field work, and so I shifted my focus a bit so that I was not relying on solely using interviews with the memory mapping technique. I still hope to explore that style of interviewing someday, but I’ve decided not to make it the main focus, because it is always a possibility that interviews have to switch to the online setting.

I began developing a walking tour with a collaborator in Barcelona based on the digital map I created, as another way to make the research more accessible to people in Barcelona. After talking about it with Prof. Evans, we realized I could include that experience in my thesis as a way to explore another aspect of doing spatial history – what changes when you’re walking through this city’s history, rather than moving through a map of it? How do we create a walking tour that is socially conscious, and not geared for tourism? These are some of the questions that I am finding really exciting, and which are bringing me in directions I was not expecting at all!

Learning to adapt and let go of old expectations has been really necessary as a graduate student during COVID-19, and Prof. Evans has been very helpful in pushing me to consider new angles or different opportunities within what was possible for me research-wise. She also pushed me to draw from disciplinary streams that I would not have necessarily considered, and to read theorists that seemed daunting but that had a lot of rich and helpful ideas once I dug in.

I was also lucky to have the help of Professor Shawn Graham with the digital humanities aspect, he gave me tutorials on coding and put me in touch with the wonderful GIS librarians at Carleton, in particular Rebecca Bartlett who has taught me a lot about preparing data for mapping.

I have also received a lot of very helpful feedback from my peers through a club that myself and fellow MA students Danielle Carron and Sammy Holmes created together called the History Grad Research Club, where we present our research to each other and through that experience find new ideas to explore and important connections between our work. We are continuing that this year, and hopefully others will take it up once we graduate!

I am passionate about making historical research accessible, and love researching in general, so I am looking to careers that can include those aspects. My experiences creating digital exhibits, working as a teaching assistant, and as a research assistant to the Gendered Design in STEAM project at Carleton are all providing me with valuable new skills and have opened my eyes to other career possibilities that I had not considered before, which I think is an important part of an MA degree.

I would definitely recommend the History department at Carleton – I have had a really good experience, even though I have not yet stepped inside the physical department since starting, due to COVID-19 restrictions! There was a lot of effort on the part of the students to foster community despite the situation, and I had great professors who were very accommodating and quick to adapt. I also recommend the Digital Humanities specialization to anyone with interest in exploring what digital tools can do and how best to use them, I had very few digital skills when I began and am leaving having learned a lot. 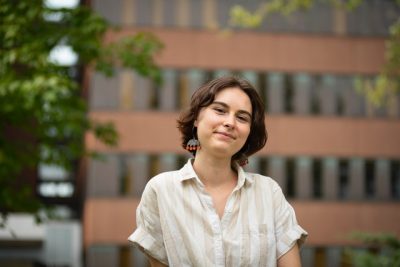