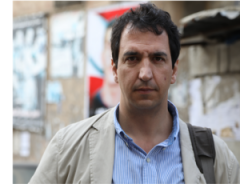 Michael Petrou, an adjunct research professor in the Department of History, has been hired as “Historian, Veterans’ Experience” at the Canadian War Museum.

Part of the job will involve gathering oral histories from veterans about their post-war, and wartime, experiences. These will be made available to the public through a digital portal.

Petrou is a former foreign correspondent who reported on wars in Afghanistan, Iraq and elsewhere. He has published two books: Renegades: Canadians in the Spanish Civil War (UBC Press) and Is This Your First War? Travels Through the Post-9/11 Islamic World (Dundurn). He has more recently published a book chapter on Jewish Canadians in the Spanish Civil War and a Journal of the Canadian Historical Association article on the Special Operations Executive’s recruitment of Yugoslav immigrants to Canada in the Second World War.

Petrou is teaching HIST 4915 B: The Fall of the Ottomans and the Making of the Modern Middle East in the Winter 2022 term.