Home / News / Michael Petrou Interviewed for Article on the History of Sept 11, 2001

Michael Petrou Interviewed for Article on the History of Sept 11, 2001 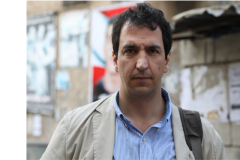 Adjunct Research Professor Michael Petrou was interviewed by Erica Alini as part of her article describing what the events of September 11, 2001 mean to today’s young adults. A short excerpt is provided below with the full article, “For generation Z, 9/11 is history. How do they relate to it?” available online.

The fact that gen. Z doesn’t have a living memory of the events of Sept. 11 and much of what followed is “disjointing” and “a little bit discombobulating,” says Michael Petrou, a veteran foreign correspondent and editor in chief at Open Canada who also teaches in the history department at Carleton University.

Petrou went to Afghanistan in the fall of 2001, where he was embedded with the Northern Alliance, an Afghani coalition that had been battling the Taliban since well before the U.S.-led military campaign.

The U.S., Canada and other nations started the war in Afghanistan because the Taliban had sheltered al-Qaeda, the terrorist group behind Sept. 11. But when Petrou travelled to country shortly after the attacks, he says he saw no sign yet of the international forces on the ground. There were only B-52 bombers flying so far up in the sky they were just “a glimpse of sunlight” reflecting off their metal bodies.

What’s different about how his gen. Z students contemplate Sept. 11 and its ripple effect is that they can do so “more dispassionately,” which, he adds, “is probably a healthy approach.”

Professor Michael Petrou is teaching HIST 4915B: The fall of the Ottomans and the making of the modern Middle East in the Winter 2022 semester.