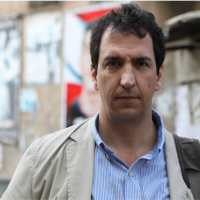 As a journalist, Petrou has reported from across the Middle East, Central Asia, Africa and Europe. He’s won three National Magazine Awards. His 2012 book, Is This Your First War? Travels Through the Post-9/11 Islamic World, won the Ottawa Book Award for non-fiction.

Petrou studied at the University of Oxford’s Saint Antony’s College. He is a fellow at the Montreal Institute for Genocide and Human Rights Studies. His research interests include modern Canadian, European and Middle Eastern history.