Rod Phillips talks about wine and art in San Diego 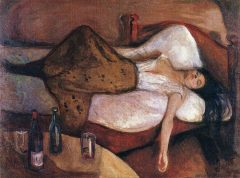 Edvard Munch, The Day After

Professor Rod Phillips gave a talk on wine and art at the Timken Museum of Art in San Diego on 14 August.  Titled ‘Intoxicated by Art: Wine and Art in the Age of Temperance’, his talk focused on the representation of wine and wine-drinking between about 1830 and 1930.   This was a period of heightened anxiety about alcohol in many countries, culminating in restrictive alcohol policies in many countries and Prohibition in Russia/USSR, the U.S., and elsewhere.

Although much of the art of this period showed wine neutrally or positively in still-life compositions and at festivities – as it had been shown for centuries – there was an unprecedented representation of alcohol in a negative light.  Many paintings showed morose, solitary drinkers (drinking alone was thought problematic); many showed women drinking alone, drunk, or passed out, at a time when there was a male opposition to women’s drinking; some showed the social effects of excessive wine-drinking, such as the neglect of family and children; others portrayed men trying to resist wine.

The Timken Museum of Art is in the cultural complex of San Diego’s Balboa Park. It is a privately owned gallery, free to the public, with an impressive collections of Masters (including Rembrandt, Rubens, and Bruegel the Elder) and modern artists. In 2019, Rod gave a lecture there on wine in the art of the Masters, and he will return in 2023 to give another talk on wine and art.