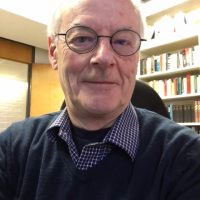 “The First Nations of Canada: social welfare and the quest for self-government,” with Annabel Spagnut. In, Social Welfare With Indige­nous Peoples­, eds. John Dixon and Robert P. Scheure­ll. Lon­don: Routledge (1995): 1-53.

James Daschuk, “Clearing the Plains: Disease, Politics of Starvation, and the Loss of

Brian Titley, “The Indian Commissioners: Agents of the State and Indian Policy in

Tim Schouls, Shifting Boundaries: Aboriginal Identity, Pluralist Theory, and the Politics of Self

“Stories from Conferences Past: Academia, Government and Canadian Indian Policy, 1939 and 1960.” Paper delivered at the Annual Conference of the Canadian Historical Association,Congress of the Social Sciences and Humanities, Calgary, AB. (June, 2016).

“Liberal (Reform) Judaism, Christian Social Reform and the Settlement House Movement: A Case Study of the Origins of the Oxford and St. George’s Settlement House in late Edwardian East End London.”   Paper delivered at the at the Annual Conference of the Canadian Association of Social Work Education, Congress of the Social Sciences and Humanities, Calgary, AB, (May, 2016).

“Social Policy and Canada’s First Nations: Towards Full Autonomy.” Paper presented as part of the panel, “Colonization/Decolonization,” Society for Socialist Studies, Congress of the Social Sciences and Humanities, University of Ottawa. (June, 2015).

“Strangers in their own Land: First Nations and Canada as a Placeof Peril.” Paper presented at “Canada as Refuge?” Conference at the Centre of Canadian Studies, University of Edinburgh, Edinburgh. (May, 2008).

“Academia, Canadian Indian Policy and the Narrative of Progress and Transition Before and After World War Two.”

“Navigating Class and Religion in Edwardian England: Basil Henriques and the Founding of the Oxford and St. George’s Settlement House.”