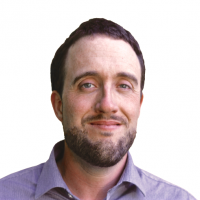 Professor Daniel Tubb applied to Carleton University on a whim.

It was by chance that a friend of his applied and so he did as well. But this simple happenstance ended up changing his life path for the better.

As soon as he came to visit Carleton as a potential graduate student, he noticed the sense of community at the Institute of Political Economy.

“Carleton gave a really good first impression,” Tubb says. “I had really good access to faculty in a way that was very compelling and led to a very good graduate experience.”

“It was just a very human experience of people doing critical research through an interdisciplinary program,” he says. “It was something I didn’t see in the other places I applied.”

With the Institute of Political Economy, Tubb found a “community of scholars that are working from different backgrounds but with coherent perspectives.”

And Tubb says it was the community created by the Institute that led him to stay at Carleton for his PhD.

“By the time I’d done my master’s and I was in the PhD program, my community grew. It was no longer just political economy, but it included people who were doing PhDs in political science, geography, or various other disciplines as well as faculty.”

This was also due to the uniquely interdisciplinary nature of the Institute for Political Economy, which brings together graduate students from diverse academic backgrounds, all with an interest in how political economy fits into their field of study.

These years with the Institute were formative for Tubb, who now works as an assistant professor in the department of anthropology at the University of New Brunswick.

As a master’s student, Tubb’s research focused on urban public policy in Colombia. And with support from his faculty supervisor, Cristina Rojas, Tubb was given the opportunity to do fieldwork as part of his research. This led him to the PhD program, where he focused on gold mining and rural livelihoods, involving nearly two years of fieldwork.

“A lot of those questions and ways of approaching them and ways of thinking about them come out of my graduate education at Carleton and a huge part of that was political economy,” he says.

At the University of New Brunswick, Tubb maintains research interests in Colombia, focusing on economic and environmental anthropology and resource extraction in Colombia and New Brunswick.

As a faculty member himself, Tubb reflects on his time at the Institute of Political Economy and values the importance of community, and the faculty that helped to foster it.

“I think I’ve come to see that as one role that faculty members are supposed to do. You’re supposed to build spaces for students to come together.” he says.

His advice to students interested in the political economy graduate programs is to engage with faculty members.

“I was very intimidated that first semester and didn’t really talk to faculty members,” he says. “I got better at it and things got easier as time went on.”