Director, Institute of Political Economy and Associate Professor of Sociology 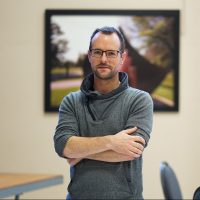 Director, Institute of Political Economy and Associate Professor of Sociology

Justin Paulson is a political sociologist and social theorist whose seminars, courses, and directed readings typically address questions of critical theory and intellectual history, social change, and political economy. He is the recipient of the 2016 Graduate Students’ Association Excellence Award in Graduate Teaching and the 2013 Faculty of Arts and Social Sciences Teaching Award, and has been nominated for a Capital Educators’ Award.

Ongoing research projects include collaborative work on the socioeconomic contours of dispossession and resistance in British Columbia and in the Pontiac region of Québec, and a book on the uneven reification of capital. Recent conference papers have focused on such topics as dispossession in British Columbia, the relationship between Marxism and critical Indigenous scholarship, the contingencies of social movement success and failure, spaces and scales of organizing, activist subcultures and mutual aid, punk rock and political education, structure and agency, and reification and the spaces of capital.

Dr. Paulson serves on the executive and editorial boards of the journals Studies in Political Economy and Mediations. He is also a member of the editorial collective of Red Quill Books, and serves on the advisory board of Alternate Routes and the scientific board of Moment. He is a past-Vice President of the faculty union and a sitting Senator representing the Faculty of Arts and Social Sciences.

Prior to joining Carleton in 2008, he taught history at Seattle University, arboriculture at Linn-Benton Community College, and interdisciplinary courses at the University of California-Santa Cruz.

“Dispossession in the Pontiac, 1850-1920” (co-investigator with Julie Tomiak)

The first paper of the project, “Original and Ongoing Dispossessions: Settler Capitalism and Indigenous Resistance in British Columbia”, traces the unique dynamics of primitive accumulation in British Columbia; it is forthcoming in the Journal of Historical Sociology.

“Punk Rock, Antifascist Education, and Political Action: Lessons from the 1970s” — plenary talk at the Canadian History of Education Association conference (Fredricton, 2018), on the relevance of antifascist campaigns through Rock Against Racism for antifascist organizing today. Under revision for the the “Music and Antifascism” workshop and conference in Montréal, 2022 and edited collection.

“Original and Ongoing Dispossessions: Settler Capitalism and Indigenous Resistance in British Columbia.” (co-authored with Julie Tomiak.) Accepted and forthcoming at the Journal of Historical Sociology.

“On the Uneven Development of Radical Imagination.” Affinities (2011).

He may have more supervisory room in 2022, at which time he would be particularly interested in working with one or more incoming students studying the social histories and contradictions of settler colonialism in Canada and/or the theoretical intersections of Marxism, Indigenous Studies, and the racial capitalism literature.

Note: Although most Carleton departments have dropped their second language requirements, Dr. Paulson still expects doctoral candidates to demonstrate research proficiency in more than one language, and his supervisees are expected to develop any necessary language competencies during the course of their program.

Dr. Carlo Fanelli (Sociology), “Fragile Future: The Attack Against Public Services and Public Sector Unions in an Age of Austerity”, 2013.

Sabrina Fernandes (IPE), “The Cursinho Industry and the Advancement of the Neoliberal Agenda for Access to Education in Brazil”, 2012 (with medal nomination).

Aaron Henry (IPE), “Export Development Canada, Capital, and Political Risk: From a Keynesian to a Neoliberal Regime of Spatial Production”, 2010.

Tamara Paradis (Sociology), “Neoliberal Digitality, Labour and Leisure in an MMOG: An Ethnography and Analysis”, 2010.

Sophie Robinson (IPE), “Redistribution, Equity, and the End of Poverty…All for One Low Price? Basic Income and Social Reproduction in Canada,” 2021.

Tessa Blaikie (IPE), “From the Roots of Violence to the Roots for Allied Relationships,” 2013.

Shawna Holmes (Sociology), “The Revolution Will Not Appear in Your News Feed: An Analysis of Activism in Online Social Networking,” 2010.