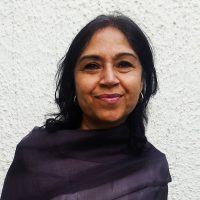 When you ask Dr. Navsharan Singh how she came to be a promi­nent advocate for women’s rights throughout South Asia, she recalls an incident from her childhood in the northern Indian province of Punjab.

“I had a friend on my street who was married when she was 16. Six months into her marriage, she was burned alive for not having a large enough dowry. That trauma had a profound impact on me,” recalls Dr. Singh.

As she matured, Dr. Singh says she wanted to understand what in the region’s history and politics allowed millions of women to fall victim to violence. Rapes, abductions and murders were common­place during the first partition of the subcontinent in 1947, the second partition in 1971, and in India’s Kashmir and the Northeast. Violence was also commonplace in Sri Lanka.

“I wanted to know,” recalls Dr. Singh, who went on to join women’s rights groups at a local university, “what explained the impunity the perpetrators enjoy – be it the men in uniform or ordinary men in homes and in communities?”

But she says it was her Commonwealth Scholarship, which brought her to Carleton University, that exposed her to the systematic study of the feminist question and ideas that enabled her to challenge the treatment of women in South Asia.

Initially, Dr. Singh considered studying economics, but she switched into the Institute of Political Economy due to its emphasis on field research because “that was where my heart was. I was set on questions that I saw as life and death for women.”

Today, Dr. Singh spends much of her time on research and advocacy for understanding and overcoming women’s marginalization in economy, polity and society.  She travels through India, Pakistan, Bangladesh and neighbouring countries documenting and speak­ing out about the challenges faced by women in South Asia, as a senior program specialist for the International Development Research Centre (IDRC).

“In the work that IDRC supports, we keep asking why we are so immune to what happens to women in South Asia,” says Dr. Singh. “There are gaps in the law in medical practice, in state willingness to apply laws and in social sanctions. Large-scale violence that women endured in the region at the time of conflicts remains a festering wound in the region’s body politic.”

Dr. Singh’s efforts have contributed to bringing positive effects to the lives of women and marginalized people in the region: she works with several women’s research and advocacy NGOs that have successfully created standard operating procedures for police depart­ments dealing with sexual violence in Mumbai; another is campaigning against the 35-day limitation period for reporting a rape in Nepal; and another has created medical protocols for gather­ing evidence when a rape victim is brought to a hospital.

“Many questions remain and there’s a need to lobby for better policies and changed attitudes. My hands are quite full,” she acknow­ledges. “But I am hopeful because women in this country are so resilient—even when all odds are stacked against them. They’re fighting for justice and dignity and they have very strong survival instincts.”

Dr. Singh is part of Carleton’s prestigious 75 for the 75th campaign, honouring 75 of the Faculty of Public Affairs’ most distinguished alumni for Carleton University’s 75th Anniversary in 2017.