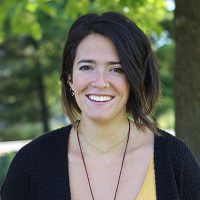 I completed my undergrad at Trent University where I studied International Development Studies. I stuck around Trent after I graduated and worked in the Gender and Women Studies department as a research assistant.

It was the Institute of Political Economy’s reputation of being a critical program that facilitated interdisciplinary learning and emphasized the importance of looking from and at diverse perspectives. I had a feeling I would be able to explore my interest in understanding power relations that shape our reality- I was not wrong!

Through the Institute of Political Economy, I worked at the Canadian Centre for Policy Alternatives as a research assistant. Working at a progressive think tank was a great was to see the political economic theory we study in the classroom, playing out through policy and politics. Since arriving in Ottawa I have been working with the Fight for $15 and Fairness, which works to mobilize communities and advocate for workers rights. Also biking! Being in Ottawa can mean biking everywhere!