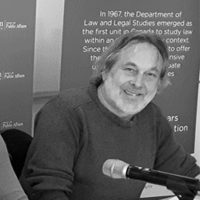 Since 9/11 my research has focused primarily on the legal fallout from the events of that day, America’s ensuing war on terror, and what each of these portends for an international rule of law and global justice. Extraordinary rendition, the use of torture, Canada’s involvement in Afghanistan, the legality of aggression, and the role of law in mitigating international conflict have become crucial concerns. I regard each of these as deepening a wider set of interests in processes of ‘globalization’ and the transformations its forces have engendered for social and political life in late-modernity.

At present I teach three courses; two undergraduate and one graduate:

The subject matter of each of these courses has become a passion, and each dovetails crucially with my research interests. But my intellectual roots are in political economy and social and political thought.

In addition to the courses listed above, I have also taught courses in the following areas:

I have supervised many theses and research projects in each of these areas.

Purvis, T. 2006. ‘Looking for Life Signs in an International Rule of Law’ in Bartholomew, A. (ed.) Empires Law. London: Pluto.

Purvis, T. and Hunt, A. 1999. ‘Citizenship versus Identity: Transformations in the Discourses and Practices of Citizenship’. Social & Legal Studies 8: 457-482.