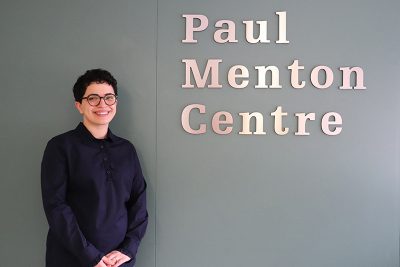 Born in Iran and raised in Kuwait, Frohan Foroutan arrived in Ottawa in 2012 to begin her studies at Carleton University. The aspiring economist found herself in a new country, culture and language, all in hopes of gaining a true Canadian educational experience. She found exactly that through helping her peers.

“Coming from a third world country I was so impressed with Canada’s and Carleton’s efforts in promoting equality and accessibility,” said Foroutan. “I wanted to help. I believe that change starts at home, and with Carleton now being my home, I dedicated my time to helping my peers to become the best possible versions of their academic selves.”

It is this great passion and dedication that led Foroutan to being selected as this year’s recipient of the Board of Governors Award for Outstanding Community Achievement, which recognizes a graduating student’s exceptional voluntary involvement while studying at Carleton. The Outstanding Community Achievement Award includes a $2,000 bursary which will be officially presented at June Convocation.

First in her family, Foroutan will be graduating with a Bachelor of Economics (Honours) with a double concentration in Economic Theory and Mathematics and Quantitative Economics. She credits her success and volunteerism to the kindness and support of the Carleton community, in particular, individuals who went above and beyond, including Prof. Peggy Hartwick and Prof. Simon Power.

“Peggy, to me, represented everything that Canada is about – inclusive, helpful, kind, and community focused. All of these aspects were embedded in her English as a Second Language for Academic Purposes course,” said Foroutan. “She had an amazing impact on me and was so great at helping and accommodating others. I wanted to learn how I could pass it on. That’s when I began volunteering with the Linguistics department which led me down this great path.”

Since then, Foroutan has dedicated much of her time to peer support, building a vast resume of volunteerism through Carleton programs such as the Paul Menton Centre for Students with Disabilities, Enriched Support Program, First Year Connections Program and Bounce Back Program.

“One might wonder how it is she can undertake all these activities,” wrote Jocelyn van Wynsberghe, Student Services Support Officer, who volunteered with Foroutan and provided a letter of support. “When she is not studying herself, she helps others. She is very positive and thinks she is privileged to study and wants to give back to others.”

This sentiment was echoed by economics Prof. Simon Power, who also provided a letter of support for Foroutan’s nomination.

“Ms. Foroutan has set an outstanding example of how it is possible to succeed academically, demonstrate extraordinary leadership, and commit to community service,” wrote Prof. Power. “She has contributed immensely to Carleton, both in terms of her academic success and in terms of her participation in a truly astounding range of extra-curricular and volunteer activities.”

With her family remaining in Kuwait, her husband in America, and the barrier of travel bans, Foroutan is alone in Canada – a reality that many international students face. But she has found her commitment to volunteering provided her with the great gift of community.

“I spend a lot of time on campus and the people here, like Prof. Simon Power and Prof. Peggy Hartwick, have made Carleton seem like home,” said Foroutan. “They provided a sense of community for me and have guided me through my journey. I hope to be a Simon or Peggy for someone else.”

Foroutan also views her contributions as a civic duty all students should partake in to not only build resilient communities, but complement their education.

“Volunteering at Carleton gave me the character needed to make change,” said Foroutan. “Character matters, you need to be kind, help others and have compassion. It is not being the most educated person that changes the world, it is your character. Your education doesn’t teach you that, the Carleton community teaches you that.”

When asked which experience was the most impactful, Foroutan named the Paul Menton Centre, through which she volunteered as a tutor, mentor, note take and guide. She went so far as to have devised an implementation plan for adapting GPS technology to the map function of the CUMobile app for visually impaired students.

The Board of Governors Selection Jury was impressed by Foroutan’s significant volunteerism across campus and noted that it exemplified her passion for helping and her deep empathy for others.

“I believe in community and doing what you can to help those within it succeed. This is why I dedicate my time to helping my peers,” said Foroutan. “The experience has come full circle as I am now, due to personal reasons, requiring the assistance of the Paul Menton Centre.”

Foroutan hopes to encourage more students to volunteer on campus.

“We often talk about the future and making the world a better place but we often forget that we have to start within our own community, our Carleton community,” said Foroutan. “It’s as simple as sharing your notes as a note taker in class.”

With only a few months until graduation, the soon to be Carleton graduate’s journey does not end in June. Foroutan has accepted her offer to join Carleton’s Masters of Economics with Specialization in Data Science commencing fall 2019. She looks forward remaining at Carleton and continuing her work with the Paul Menton Centre and Enriched Support Program.

Learn more about the Carleton University Board Award for Outstanding Community Achievement at: www.carleton.ca/boardofgovernors