I think that ideally if most people had their wish it would be, just extend the Château Laurier exactly as it is. It would be easy, but I don’t think it would be the right way to go.
(Jan Harder, City Councillor and Chair of the Planning Committee, Ottawa Citizen, June 12)

…unless Heritage Ottawa gets the developer to construct an exact copy of the century-old hotel, it will never approve the expansion.
(Mohammed Adam, Ottawa Citizen, June 11)

A hundred years ago, it was radical and subversive to suggest that an architect ought to design a major building in anything but one of the established historical styles – mainly (but not only) Classical or Gothic. Today, mainstream orthodoxy has turned that upside-down. Most architects today would rather chew on a pack of razor blades than design in a historical style – even when designing an addition to an existing historic building. Modernism, once so novel and radical, has become today’s conformity. So widespread has it become that in the above quotations, a City Councillor, a journalist, and an architect are all singing the same tune.

When everyone is bleating in such unquestioning unison, the time has obviously come to think again. And somebody has. Michael Pfaff is a Canadian student studying for his Master’s degree in architecture from the University of Notre Dame. He recently defended his thesis on the Chateau Laurier and its current proposal for expansion. His goal was to offer a counter-proposal to the modernist addition. Here’s what his offering looks like: 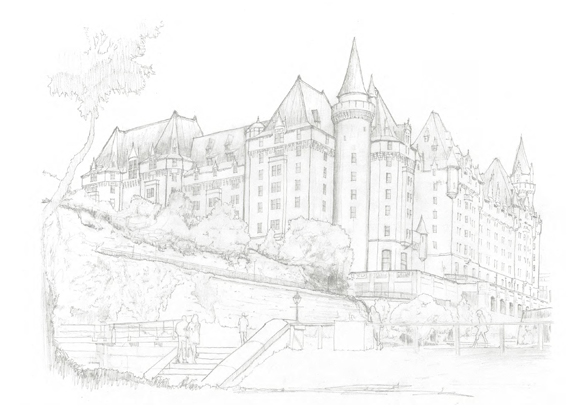 As you can see, the extension blends perfectly with the historic building. In today’s climate, the sheer audacity of being so stubbornly respectful is breathtaking. This is precisely what Peter Clewes insists must not be done. To Clewes, something like this is actually more respectful to the heritage hotel: 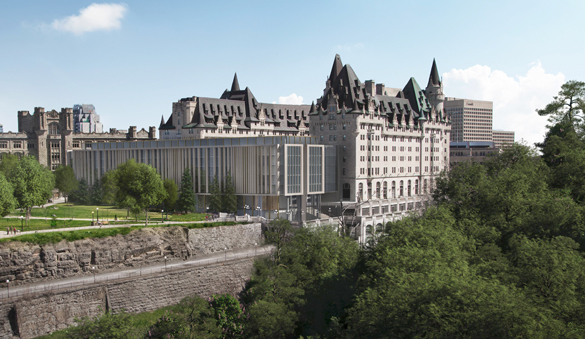 Mohammed Adam described this design as ‘edgy’, but no one who actually looked at buildings in the 2nd decade of the 21st century could seriously call a rectangular glass box ‘edgy’. But to design in an overtly and unapologetically historical style, as Pfaff has done, takes real courage. And anyone who does so had better be prepared to defend themselves. Here’s what Pfaff has to say about his design rationale:

My design is based upon my belief that buildings should respond to their context. The modern addition does not respond to its context in anyway. It relies upon a parasitic condition to the historic fabric for it to work. For the Château Laurier’s addition, I believe the addition should go beyond the typical interpretation of “compatibility” as stated in Parks Canada’s Standards and Guidelines for the Conservation of Historic Places due to its siting and its architectural and historical importance. Instead, the addition should be grounded in the historic Château Style language, not in abstract qualities like height lines and materiality. I respect the Château Style immensely as an important cultural asset for Canada which should be allowed to continue to develop as a verifiable architectural expression.

While some might declare that continuing to build in the Château style as backwards and not “of our time”, I believe that there is no such thing as false history in preservation. Ultimately, we determine our architectural history, which has the potential to be shaped by a more traditional approach to design. The problem most architectural professionals have with traditional or “pastiche” buildings built today is that they don’t fit into their architectural history, which is prejudiced to their established timeline of modernism. There is a pluralism to architecture which I don’t think is often considered when looking into modern buildings. At Notre Dame we are exposed to good traditional buildings which are being built today around the world proving that traditional design is alive and well, despite modernist ideology and we also have the means to construct a Château style building in 2018.

Now, there will be some who disagree with Pfaff’s approach. But in defending historicist design in the 21st century, he breaks a taboo and challenges an assumption that has devolved into banal orthodoxy. And he doesn’t just declare his position; he argues it cogently. He shows us that the unmentionable is in fact a serious option.

And I’m willing to bet that a lot of people in Ottawa would find his design a lot less objectionable than the one we are currently being offered. 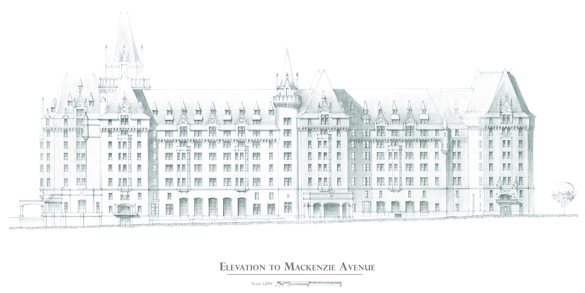