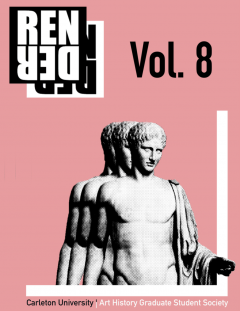 It is my honour to introduce the Eighth edition of the RENDER Graduate Journal. This volume would not have been possible without the help of Rebecca Watson who served as my assistant editor, and will continue as RENDER’s editor next year. I would also like to thank Ginny Stovel, who gave her time and expertise to edit the journals with Rebecca and I, we couldn’t have done it without you!

This volume is also indebted to all of the students who submitted such thoughtful, provocative and engaging work. We got a diverse range of essays from multiple disciplines and across multiple institutions, which made the decision of which to publish incredibly hard. In the end, we have compiled a group of papers which highlight contemporary perspectives on subjects ranging from the eco-critical work of Mishka Henner, to film studies, the renaissance, fan fiction, queer identity, and the conceptual work of Korean artist Kimsooja.

Thank you to our writers Marilyn Adlington (OCAD), Lauren Lussier (SSAC), Ginny Stovel (SSAC) Beth Shepherd (SSAC), Madeline Bogoch (Concordia), and Sneha Kumar (SSAC). This journal would be nothing without you.

It has been a privilege to occupy the role of editor for RENDER this year, and to be able to hold space in academia for this group of incredible young writers! It is my hope that the journal will to continue to expand to include diverse and multidisciplinary thoughts on visual culture as they apply to both our discipline and society at large.

Thank you for visiting the eighth edition of the RENDER Graduate journal, we hope you enjoy!

“Mishka Henner’s Feedlots: A New Perspective on the Ecocritical ‘Landscape’”
by Beth Shepherd

Although industrial animal agriculture is one of the main causal factors in many of the current environmental crises, including climate change, it has provoked little interest in either the art world or ecocritical scholarship. One notable exception is Feedlots (2012-13) by post-photography photographer, Mishka Henner. His seven high-resolution images were made by stitching together hundreds of high- resolution screenshots from Google Earth into never before seen images that have drawn considerable attention from audiences in various contexts. Using the “Google gaze,” Henner reveals some stark realities of life on the feedlot as well as the scale of the environmental devastation brought about by the global agribusiness.

“Naturalism in Religious Paintings: A critical reanalysis of Lavinia Fontana”
by Ginny Stovel

Women painters are often underestimated when it comes to challenging and intellectual paintings. This article focuses on sixteenth century Bolognese painter Lavinia Fontana and her didactic approach to representing divinity through naturalism in her religious work. While she is generally best remembered as a portraitist, the caliber of her religious works prove she was an integral participant in the intellectual artistic discussion of the Counter-Reformation. While Fontana has not received full recognition for her skill as a religious painter, by discussing her paintings in comparison with similar work by well-known male painters, it is clear that her work deserves more critical attention and recognition.

Kimsooja is a contemporary Korean Conceptual artist whose interdisciplinary artistic practice brings forward a meditative quality that encourages both the artist and the viewer/participant to move towards an entirely open awareness of the self. Kimsooja’s art and approach to life are influenced by Eastern philosophies and belief systems such as Buddhism and Taoism. As such, the presence of her art in the Western world effectively weaves together two different, but not mutually exclusive, cultures and ways of thinking. Temporality, anonymity, and performance are central to many of Kimsooja’s works, giving her the ability to transform her personal experiences into neutral, universally accessible artworks that highlight human connection across time, space, and identity.

“Generation Loss: Bootlegs, Dubs, and Other Labours of Love ”
by Madeline Bogoch

In his evocative essay Embedded Memories, Will Straw claims “the videocassette contains textual forms that are the expressive residues of more broadly-based cultural knowledges and aesthetic languages.” If, as Straw asserts, media is a vehicle of aesthetic languages, then how is its circulation leveraged semantically? In this paper, I pursue this question through two very different works which, on their own terms, provide insight into the prolific collisions that can occur between “format and feeling.” The first of these case studies is the Todd Haynes film Superstar: The Karen Carpenter Story (1988), a pseudo- biopic which has thrived as a bootleg commodity since its removal from circulation, sustaining material degradation with each successive dub. The second is artist Daniel Barrow’s Winnipeg Babysitter: An Incomplete, Local History of 1980s Public Access Television (2009), an archival-performance piece which assembles fragments of Winnipeg’s golden age of public access broadcasting. Although in different ways, both of these moving image works are inextricably tied up in the afterlife of the footage itself, and the potency embedded in the material inscriptions their unique histories have written onto the media. Tracing the effects of these material inflections, this project considers how the aesthetics of obsolescence contribute to a reading of both works.

“The Portrait That Looks Back:  Exploring the Queer Expanded Presence of Collage in the Portraiture of Paul Mpagi Sepuya and Mickalene Thomas ”
by Marilyn Adlington

This paper seeks to unpack the revolutionary potential of collage. By virtue of its form, collage has the potential to radically subvert or complicate traditional narratives and structures as well as to articulate the fragmentary experiences of contemporary life. Tracing the legacy of collage first through Dadaism and the Harlem Renaissance, collage has historically been a way of responding to the failure of the systems that shaped society. Black artists and Dada artists deployed collage as a tool to express radical messaging and cultural critique. As a methodology for an expanded visual culture, contemporary artists Mickalene Thomas and Paul Mpagi Sepuya use collage to visually articulate queer identities, orientations, and desires through portraiture. The gesture of collage shifts the priority of portraiture away from representation and toward the vitality of disconnections, complications, and incompleteness within an image. Employing Sara Ahmed’s Queer Phenomenology as a strong theoretical foundation, this paper articulates the value of disorientation through collage, demonstrating how fragmentation and hybridity are valuable tools that have the capacity to create space for an expanded visual culture that represents black, queer futures.

“Contextualizing Carmilla: Bridging the Gap Between the Gothic, the Lesbian Vampire, and Fanfiction”
by Sneha Kumar

In this essay, I argue that Carmilla (Canada, Spencer Maybee 2014-2016), a 121-episode web series shot in vlog format that follows the relationship between a human girl, Laura Hollis, and a female vampire, Carmilla Karnstein occupies a liminal space between fanfiction and industrial product. My understanding of this liminal space has been informed by the work of Aymar Jean Christian. The series is loosely inspired by Joseph Sheridan Le Fanu’s 1872 novella and the many previous filmic adaptations of the novella, but adapted to contemporary university life. Referring to the scholarship of Sarah Parker, Andrea Weiss and Barbara Creed, I propose that the Carmilla series has been born out of two major literary and film traditions: the lesbian gothic and the status of the lesbian vampire in film history.