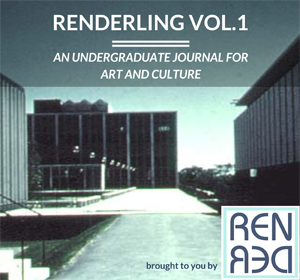 In celebration of the fifth year of RENDER: The Carleton Journal for Art and Culture, the Graduate Editorial Committee is excited to introduce the first volume of Renderling: An Undergraduate Journal for Art and Culture. Renderling will be a place for undergraduate students at Carleton to share their research related to themes of art and culture, including but not limited to art history, film studies, and architecture. Renderling is the brainchild of the 2016-17 Assistant Editor Katie Kendall, and is a graduate student-reviewed and compiled journal to be produced annually to coincide with the publication of Render.

As with the production of RENDER we hope that Renderling will provide fruitful discussions around art and encourage the creative, scholarly spirit of undergraduate students, allowing them a supportive environment to test ideas and develop critical academic writing skills.

There is a new dynamic developing in Canada’s North. Historically, when development was proposed, the building projects were designed by distant, hubristic companies influenced by distorted Southern beliefs about the North. This resulted in unsuccessful projects and disappointed communities. Canadian essayist John Raulston Saul referred to this when he wrote, “there are few signs, but very few, of any attempt to see the North from the North’s point of view.”1 However, new projects have begun to emerge that challenge these historical practic-es. These conscientious and empathetic developments are built on a solid foundation of community consultation and direct dialogue with their end users that factor in local weather and geographic concerns, as well as social and cultural functions. While this is a simple, intuitive‑sounding idea, it has been thoroughly neglected and even legally withheld from northern communities; yet, end user involvement is the clearest path to a project’s success. Download the PDF:  Goldie “Piqqusilirivvik”

“Kaufhaus Des Westens: a German State for over 100 Years” by Elizabeth Zeunert, History and Theory of Architecture Student

Kaufhaus des Westens has been a celebrated institution of consumerism in Berlin for over one hundred years. This luxury department store is the largest of its kind in continental Europe; an emblem of the “[historical tradition of] European urban department stores such as Galleries Lafayette in Paris, Selfridges in London or la Rinascente in Milan”.1 Serving the German capital as more than simply a consumerist institution, Kaufhaus des Westens has grown simultaneously with Berlin, adapting its commercial space into a civic one. This idea is exemplified in Kaufhaus Des Westens’ stature as the only Berlin department store to survive 20th century Ger-many; having supported the retail infrastructure of Berlin since pre-war times with a rich history of its own. Affectionately nicknamed “KaDeWe” by Berliners, it is an emblem of Western consumerist ideals. This has caused KaDeWe to not only contribute to Berlin’s culture as a haven for consumerism, but also as a state centre for political ideas. KaDeWe is in a constant state of change, remodeling approximately every ten years. These renovations help KaDeWe to surpass its competitors by reflecting the societal needs of a city that is in a perpetual state of transformation. The history of KaDeWe demonstrates how the store has overcome the same challenges as Berlin and has kept in pace with the growth and transformation of this capital city. Hence, I will argue that Kaufhaus Des Westens is more than a simple shopping centre in Berlin; it exemplifies the evolution in consumerism, culture and politics experienced by modern Germany. Download the PDF: Zeunert – “Kaufhaus Des Westens”

It is difficult to grasp the scope of change that transpired in the nineteenth century. In mere decades, empires rose and fell. Individual fortunes acted in much the same way; being both the products and victims of unimaginable risk. Emerging industries injected vast wealth into varied social classes, social mobility is hopeful and all consuming— that which was once reserved only for an oligarch or a plutocrat suddenly became the domain of the newly minted ‘industrialist.’ As such, a triumphantly ‘gilded’ age emerges over the latter decades of the century. Such an era’s dynamism and energy necessitated a distinct and lavish architecture to properly document its contours.

Simultaneously, the late century sees an architectural language emerge for each of the major European empires. In North America none are more dominantly articulated than those of the perpetually dichotomous English and French. It is here where the last great empire, that of the Americans, emerges. Although ultimately derivative of imported European traditions, American settlers hold a high degree of cultural flexibility when com-pared to their European contemporaries, thanks in large part to their geographic isolation. To carve out their own national identity, settlers turn culture inward: towards the so-called ‘American’ landscape.1 Download the PDF: Peterson – “Nesting Paradigms”