Jean Monnet Network Public Lecture: “The Fight Against Climate Change at the Level of the European Union: A New Era for Climate Diplomacy!” 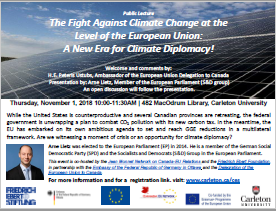 We are pleased to co-host a public lecture by Arne Lietz, Member of the European Parliament (S&D Group), “The Fight Against Climate Change at the Level of the European Union: A New Era for Climate Diplomacy!”

About the lecture: While the United States is counterproductive and several Canadian provinces are retreating, the federal government is unwrapping a plan to combat CO₂ pollution with its new carbon tax. In the meantime, the EU has embarked on its own ambitious agenda to set and reach GGE reductions in a multilateral framework. Are we witnessing a moment of crisis or an opportunity for climate diplomacy?

Welcoming remarks and comments will be provided by H.E. Peteris Ustubs, Ambassador, Delegation of the European Union to Canada.

Following the presentation will be an open discussion.

Light refreshments will be available.

About the speaker: Arne Lietz was elected to the European Parliament (EP) in 2014. As a member of the German Social Democratic Party (SPD) and the Socialists and Democrats (S&D) Group in the EP, he participates in the in the EP’s Foreign Affairs and Development committees. In February 2018, Arne, along with fellow members of the EP, began work on the EP’s 13th Report on EU Climate Policy.

This event is co-hosted by the Jean Monnet Network on Canada-EU Relations and the Friedrich Ebert Foundation, in partnership with the Embassy of the Federal Republic of Germany in Ottawa and the Delegation of the European Union to Canada. Jean Monnet Network events are funded by the Erasmus+ Programme of the European Union, by Carleton University and by partner universities.