The Jean Monnet Centre of Excellence is pleased to present a lecture: Brexit, CANZUK and the Anglosphere with Dr. Srdjan Vucetic, University of Ottawa.

PowerPoint slides for the lecture can be accessed below: 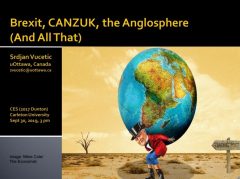 Following the “Brexit” vote in 2016 the UK government has put forward the idea of ‘Global Britain’ as an organizing principle for British foreign policy. Critics of Brexit have dismissed the phrase, and many ‘Brexiteers’ have embraced it, arguing that ‘Global Britain’ is precisely the right foreign policy route for the soon-to-be independent Britain. In this context, a number of prominent Brexit supporters have also spoken in favour of the Anglosphere and of CANZUK, a new geopolitical alliance of Canada, Australia, New Zealand, and the UK. The seminar examines these imaginaries historically, ideologically, and politically.

Biography: Dr. Srdjan Vucetic is Associate Professor at the Graduate School of Public and International Affairs. His research interests involve American and Canadian foreign and defense policy and international security. He has also published several works regarding the Anglosphere and further research on The Anglosphere Beyond Security.

This is a free public event and all are welcome to attend.