Every year Co-operative Education recognizes our employers and students with Co-op Student and Employer of the Year Awards. Students can nominate their employer for the co-op awards. Employers can nominate any Carleton co-op student who worked for them over the past year.

Nomination Guidelines for Co-op Student of the Year

Nomination Guidelines for Co-op Employer of the Year

The Co-operative Education Office is pleased to announce the winners of the 2021 Carleton University Co-op Student and Employer of the Year Awards! The Co-op Awards are presented each year to recognize the outstanding achievements, contributions, and performances of our co-op students and their employers. The Co-op Office would like to congratulate and thank all Co-op Awards winners, honourable mentions, and nominees for their contributions to Carleton University’s Co-op Program.

Select an award name below to read about this year’s winner! 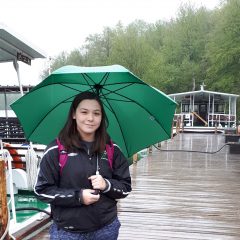 Claire de Jeu is a fourth-year student in the Bachelor of Architectural Studies and Winner of the Undergraduate Co-op Student of the Year Award. de Jeu is currently completing her third work term as an Architecture student at L360 ARCHITECTURE, a full-service architectural firm focusing on design and project management for a wide range of industries throughout Canada and the United States.

de Jeu was nominated by Paul Loreto, owner and primary architect of L360 ARCHITECTURE. Loreto highlighted that one of de Jeu’s tasks during her time at L360 ARCHITECTURE was to develop marketing submissions. She modified the current marketing brochures and added a focused approach to what the company’s message should highlight, and independently assembled a modern brochure integrating relevant images of their projects. The brochures she developed helped L360 promote their business through online marketing to prospective clients, resulting in a large increase in interest from people seeking architecture firms.

de Jeu’s quiet and confident demeanor, as well as her good humour, were noted by Loreto, saying she added to the lightness of the company, as did her ability to work with others. She was especially good at working with the younger staff, resulting in the strengthening of the team’s collaborative approach.

Loreto said that de Jeu had a “thirst for knowledge and experience,” adding that the “infectious manner in which Claire attacks any first-time opportunities put in front of her results in those around her building their own confidence. This trait that Claire shows is exactly what I would hope for in anyone starting with L360.”

In his nomination, Loreto called de Jeu a “one in a million” co-op student, saying she brought immeasurable value to L360 ARCHITECTURE from the moment she entered their office and showed her personality, integrity, and maturity. He added that with de Jeu’s skills and contributions to the team, he looks forward to her completing the Bachelor of Architecture program at Carleton and that the door will be wide open for her to join L360 on a permanent basis when she does. 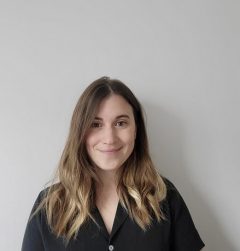 Winner of the Graduate Student of the Year Award, Danett VanTassel is a Master of Arts, Migration and Diaspora Studies student who has completed an eight-month work term as a Junior Policy Analyst in the Strategic Policy and Planning Branch at Immigration, Refugees and Citizenship Canada (IRCC).

VanTassel worked on the Levels Policy team, which is responsible for the development of the Multi-Year Immigration Levels Plan – an annual policy exercise to set the overall direction for the number of permanent resident admissions for Canada, culminating in a Cabinet decision. She was nominated by Kees Bradley, Assistant Director; Stacey Holmes, Senior Policy, Levels Policy; and Nikki Carty, Senior Policy Analyst, all from Levels Policy, Strategic Policy and Planning at IRCC.

Her nominators highlighted how VanTassel brought valuable and insightful perspectives to the team from day one, with a range of relevant domestic and international work experience, as well as her study experience in the field of immigration. Her friendly and adaptable demeanor made integration into the team very easy, even though she worked remotely for the first few months. Without hesitation, VanTassel was willing and able to take on any tasks that were assigned to her, alleviating the work of the unit while providing input that reflected a knowledge of immigration and departmental initiatives that was comprehensive and beyond the expectations for a new employee.

VanTassel’s presentation skills were also highlighted in her nomination. In one example, VanTassel and a colleague delivered an outstanding presentation on equity issues in the Express Entry selection system related to spousal points. Within it, she professionally facilitated the interactive portion of the presentation, leading a group of subject matter experts and participants through a brainstorming session to explore potential areas of focus based on the research issues they highlighted in the presentation.

Her performance, coupled with her depth of immigration knowledge, exceeded her team’s expectations. She had a meaningful impact on both the team dynamic and the important policy work through her fresh perspectives and deep real-world knowledge and hands-on experience.

A longstanding employee commented that VanTassel is one of the “most exceptional students the Branch has hired.” Following her graduation, IRCC will be looking to retain VanTassel permanently and to continue to provide her with opportunities to learn, grow, and develop, in an environment that will benefit from her tangible field experience with settlement and resettlement organizations.

Co-op Employer of the Year 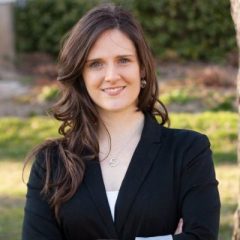 Megan Mahoney, Director, Scientific Affairs and Training Programs at BioCanRX, is the recipient of the Employer of the Year Award. BioCanRx, Canada’s Immunotherapy Network, is a network of scientists, clinicians, cancer stakeholders, academic institutions, NGOs, and industry partners working together to accelerate the development of leading-edge immune oncology therapies for the benefit of patients. Mahoney was nominated by Rida Gill, a fourth-year BSc Biology and Biotechnology student. Gill completed an eight-month work term as a Knowledge Mobilization Intern.

In her nomination, Gill credited Mahoney’s mentorship, the career growth opportunities she provided, and the work atmosphere she created, for contributing to an amazing co-op experience. Gill explained how she had the chance to hone important hands-on skills such as written communication, documentation, and report writing, but was also given a plethora of opportunities to meet with and speak to people in the cancer field. These opportunities included having Gill plan a Patient-Research roundtable event, organize and run events, and moderate career panels within the BioCanRx network. Through Mahoney’s leadership and guidance, Gill says she was able to see the different pathways and careers within the field of cancer.

Gill says, “I learned so much from [Mahoney] and regularly asked her for advice and watched how she handled things on a professional level. I had so many opportunities to expand my network through her as well as through my duties… I got to see a different side of research and see examples of real-world applications of my studies.”

Gill explains she participated in Co-op because she wasn’t sure what about her next steps after graduation and she wanted to experience different career options. Mahoney not only allowed her to take charge of multiple projects, but also guided her, valued her opinions, and gave Gill many opportunities to expand on her duties. Says Gill, “[Mahoney] was an important mentor and always left her ‘door’ open for me and regularly checked up on me but also trusted me to complete my tasks. It was the perfect environment for me to learn, but also to grow as an individual and in my career.” In her nomination, Gill highlights that it was through her current position with Mahoney that she became interested in cancer research and will be continuing on in a lab at the Ottawa Hospital Research Institute.

“This was an amazing first-time co-op experience and it showed me what a good company looks like, what good co-workers and [a good] supervisor means, and the difference it makes for a company as a whole to have a CEO who cares about them, values their opinions, and really appreciates everyone and their efforts.”

Honourable Mention for Undergraduate Co-op Student of the Year 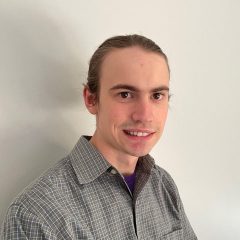 An Honourable Mention for Undergraduate Co-op Student of the Year goes to David Clarabut, a fourth-year Civil Engineering student who completed two work terms with Professor Abhijit Sarkar at Carleton University. Clarabut was nominated by Sarkar, who said, “David is a very ambitious, thoughtful, well-organized, self-motivated, and enterprising student, gifted with a fine mind and intrinsic capacity for hard work.” He also praised his analytical capability and computational skills.

During Clarabut’s co-op terms as a Research Assistant, Sarkar explains that Clarabut played a key role in an initiative on renewable energy harvesting using wind turbines. The tasks demanded a steep learning curve for theory, algorithm, software, and high-performance computing (HPC) aspects. Clarabut quickly gained understanding of the mathematical models and algorithms describing the coupled nonlinear structural dynamics and nonlinear aerodynamics of wind turbines. In order to implement these algorithms, David next learned the essentials of the Linux operating system, familiarized himself with Compute Canada’s HPC platforms, and installed and executed a complex software called OpenFAST from world-renowned National Renewable Energy Lab (NREL), United States Department of Energy. Sarkar says he considers the above research to be an extremely difficult undertaking for an undergraduate student, as such level of research is generally expected from a graduate student.

Clarabut demonstrated his ability to conduct collaborative research as he effectively interacted with the team of graduate and undergraduate students. Sarkar notes that Clarabut’s work helped Sarkar to strengthen his international collaboration with institutions in France, the United Kingdom, India, and the United States.

Sarkar says that Clarabut’s skills and pleasant personality suggest that he will become an excellent researcher and take a leadership role in his areas of research. He adds that he would be delighted to have Clarabut back in his group in the future.